Having got themselves into some great ODI form courtesy a couple of thumping wins over Ireland, Sri Lanka headed into the opening match of the one-day series against England at Trent Bridge with renewed vigour.

Having got themselves into some great ODI form courtesy a couple of thumping wins over Ireland, Sri Lanka headed into the opening match of the one-day series against England at Trent Bridge with renewed vigour. And, it showed in their performance on Tuesday. They were highly competitive with both bat and ball. But, there were phases where they let the opponent off the hook. And this is where England capitalised. They were never completely dominant in the match. But, when Sri Lanka skipped, they rose further. And, in the end, they held their nerve commendably to tie what had been a see-saw battle.

In the context of the match, the Jos Buttler-Chris Woakes partnership was most significant. Chasing 287, England were in all sorts of trouble at 82 for 6. The result seemed a formality. But, Buttler and Woakes did not give up, and took the attack into the opposition camp. Buttler did not play his naturally aggressive game, but instead held back, and concentrated on rotating the strike in the company of Woakes. He was confident that he could open up once he got his eye in, which is exactly what he did. He still ended up with a strike rate of 94. Even though he was dismissed with the target some distance away, Buttler had given the team a chance.

As for Woakes, he was a complete sensation. He was picked up in the side only because Ben Stokes was unfit in the run-up to the game. But, he was chosen for his bowling abilities more than anything else. But, Woakes proved that he can bat, and win matches with the willow as well. His unbeaten 95 was a class effort. Even though he hit just four boundaries, Woakes still ended up with a strike rate of over 100, a clear indication of his ability to rotate the strike and keep things under control. It was a memorable match for Woakes as he also claimed two scalps with the ball. The list of heroes would be incomplete without the mention of Liam Plunkett, who coolly hit a last-ball six.

Plunkett's six to tie the game, marked a remarkable change in fortunes for England in the match. The chase began in disastrous fashion for the hosts as Alex Hales, Jason Roy, Joe Root and Jonny Bairstow all fell in single figure scores to leave the team tottering at 30 for 4. Skipper Eoin Morgan contributed 43, but it was not enough to pull England out of trouble. For England to recover from that disastrous position was a splendid effort. Sri Lanka were unlucky that skipper Angelo Mathews had to walk off following the recurrence of his hamstring injury. It hurt the inexperienced side in a big way. The bowlers began looking clueless, and the fielding crumbled under pressure. 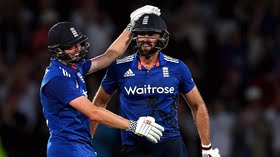 Looking back at the game, Sri Lanka will have mixed feelings. Batting first on a good surface, they should have got 300. But, their start wasn't great. The top three fell before the first 10 overs, and that hampered the momentum. Dinesh Chandimal again disappointed, getting a start and getting out. It was again left to Mathews to repair the damage. He did so with a fighting 73, but it was Seekuge Prasanna's knock outstanding knock that took Sri Lanka to a competitive total as he blasted a 50 at a strike rate of over 200. The decision to play Upul Tharanga as a lower order batsmen must be reviewed. Despite Prasanna's best efforts, Sri Lanka did not have enough on the board.