New Zealand staring at a Day 3 defeat at Hamilton!

New Zealand are heading towards a possible defeat on just the third day of the Second Test at the Seddon Park in Hamilton. By the close of play on Day 2, New Zealand are struggling in their second innings with a deficit of three runs to clear with six wickets in hand.

The second day’s play started with South Africa at 27 for 2 in reply to New Zealand’s first innings total of 185. Although, the Proteas too had their problems with the bat, a superb knock of 83 (from 133 balls with 10 fours) from AB de Villiers and a useful 35 (from 44 balls with 5 fours and a six) from no.10 Morne Morkel gave the visitors a handy lead of 68 runs. 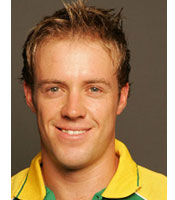 South Africa folded to 253 in 77.3 overs but they would settle for that after being reduced at one stage to 88 for 6! For the hosts, Mark Gillespie in his comeback Test took an impressive 5 for 59 in 15 overs.

The Kiwis spoilt Gillespie’s efforts by slipping to 65 for 4 in 31 overs in their second innings. By the close of play on Day 2, New Zealand have got the young Kane Williamson batting nicely on 41 (from 87 balls with 7 fours) with former Skipper Daniel Vettori (0*). Dale Steyn and Vernon Philander have taken two wickets each for the visitors.