As South Africa take on England in the Boxing Day Test at Durban, they will be encountered by an unfamiliar feeling. This will be their first Test since the 3-0 drubbing in India.

As South Africa take on England in the Boxing Day Test at Durban, they will be encountered by an unfamiliar feeling. This will be their first Test since the 3-0 drubbing in India. They headed to Asia as the number one Test side in the world, and having been unbeaten across the globe for a better part of nine years. Everything went according to plan as South Africa clinched the ODIs and T20s with ease, but come the Tests, and it all fell apart for the Proteas, especially the batsmen as they came unstuck on spinning pitches, and handed over the series to India on a platter. That series is now history and South Africa will look to start afresh and work towards a new unbeaten streak.

England will also go into the series having tasted defeat away from home. They failed to get the better of Pakistan in the UAE, even though a couple of their batsmen stood up for the team's cause. Overall though, their weakness against spin stood exposed yet again. And although, this wasn't as brutal a drubbing as enforced by Saeed Ajmal some years back, Yasir Shah was good enough to make England's batsmen pay for their incompetence. The Englishmen were completely at sea against his leg spin. England's own bowlers could not make much of an impact on the Pakistani batsmen. A combination of Adil Rashid and Moeen Ali won't give too many batting line-ups sleepless nights.

Both sides would look to put the recent disappointments behind them as they head into Durban. South Africa's batting line-up may have slept through the India series, but they will be confident of stepping up in familiar environs, similar to what New Zealand did against Sri Lanka after being drubbed in Australia. The series will be a massive Test for skipper Hashim Amla. His poor run turned worse against his favourite opponent. And, if the same carries on, the selectors would be forced to take a harsh call, first on his captaincy, and then as his place as a batsman as well. It is no secret that AB de Villiers has always harboured hopes of leading the side, and South Africa needs a leader who excels in the role. 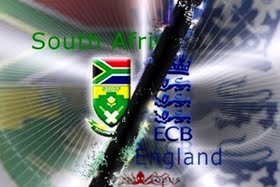 The whole South African batting unit as a whole needs to stand up against the England bowling. Faf du Plessis had a great one-day series, but an equally poor Test run in India. He surely will be keen to make amends, and would want to score bucket full of runs at home. Opening was a major problem for South Africa in India. It remains to be seen whether Stiaan van Zyl, Dean Elgar can engineer a reversal in fortunes playing at home. South Africa were unlucky in India as their main bowling weapon Dale Steyn had to sit out for most of the Test series with injury. He is back now, and that isn't good news for England. Kyle Abbott and Morne Morkel performed credibly in Steyn's absence, and their confidence should be high.

England go into Durban, having been dealt with a major blow even before the match has started. Even as Steyn returns, England's strike bowler James Anderson has been ruled out with a calf strain. In his absence, Stuart Broad will be expected to take on the leadership role, something which he has done credibly in the past. Anderson's injury gives Steven Finn another chance to impress in the five-day game. England's batting remains a worry. With Ian Bell dropped, England are down to two high quality performers in skipper Alastair Cook and Joe Root. This is one area where South Africa can expose England, and a factor that gives them a significant edge over the visitors.