Hyderabad Vs Rajasthan at Uppal, Hyderabad : It was a brilliant recovery for defending Ranji Champions Rajasthan against hosts Hyderabad! Batting first after winning the toss, Rajasthan were in deep trouble at 63 for 4!

Hyderabad Vs Rajasthan at Uppal, Hyderabad : It was a brilliant recovery for defending Ranji Champions Rajasthan against hosts Hyderabad! Batting first after winning the toss, Rajasthan were in deep trouble at 63 for 4! Hyderabad couldn't grab the opportunity and could only get one more wicket by stumps as Rajasthan worked their way to 220 for 5 in 90 overs.
India Test discard Aakash Chopra carried his bat through the innings. The opening batsman scored a patient unbeaten 82 from 272 balls with 6 fours. He got able support from Wicket Keeper Dishant Yagnik who remained unbeaten on 60 (from 130 balls with 7 fours).
For Hyderabad, 21-year-old left-arm spinner A Lalith Mohan was the most successful bowler taking 2 for 63 in 28 overs. 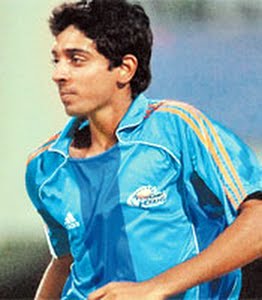 Madhya Pradesh Vs Mumbai at Indore : Hosts Madhya Pradesh fought back brilliantly as they had Mumbai reduced to 70 for 5 by Stumps on Day 1. Medium pacers TP Sudhindra and Murtaza Ali picked up two wickets for the hosts. This was after Madhya Pradesh, who were put into bat first after losing the toss were shot out for a paltry total of 192 at the Holkar Cricket Stadium in Indore.
For Mumbai, medium pacer Dhawal Kulkarni was the wrecker-in-chief taking 5 for 74 while another pacer Kshemal Waingankar took three wickets.
Karnataka Vs Haryana at Bangalore : Karnataka 151 all out and Haryana 41 for no loss according to last reports. Recent India U19 medium pacer Harshal Patel claimed glory taking 8 for 40 in 16.5 overs to humble a strong Karnataka batting line-up at the M Chinnaswamy Stadium.
Maharashtra Vs Tamil Nadu at Chennai : Maharashtra were 130 for 2 in 54 overs according to the last reports. Opener Harshad Khadiwale is the top scorer so far with 61 from 157 balls.