Admitting that playing in the IPL just after the World Cup was tough, India captain Mahendra Singh Dhoni said the fans were also "emotionally drained" after the country's historic triumph last month.

Admitting that playing in the IPL just after the World Cup was tough, India captain Mahendra Singh Dhoni said the fans were also "emotionally drained" after the country's historic triumph last month.

"The IPL schedule was tough as it came just after the World Cup," Chennai Super Kings skipper Dhoni said after his team won the IPL 4 title by beating Royal Challengers Bangalore by 58 runs in the summit clash here last night.

"The whole of India wanted the country to win the World Cup and we did. The fans were a bit emotionally drained after the World Cup to come out in large numbers initially in the IPL. But they later came out to watch the IPL," he added. 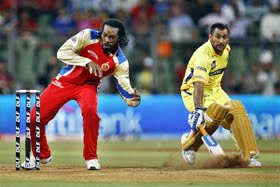 Speaking about Saturday's comprehensive victory over RCB, Dhoni heaped praises on the opening pair of Michael Hussey and Murali Vijay for setting up a huge total with a 159-run stand. "Well you can say we saved the best for the last. Vijay and Hussey gave us a great start and stayed till the 15-16th over. Hence we could maintain the momentum and score over 200 runs," he said.

"You want to show intent in a final and show you want to win it. That's what the batsmen did," he added.

Dhoni also praised off-spinner Ravichandran Ashwin for his impressive spell of 16 for three. "Ashwin bowled really well, he has real heart to toss the ball really well up even with just two fielders outside. Very contributive performance," he said.

Asked which one was tougher in CSK's title win between last year and this season, Dhoni said, "Last year we struggled a bit to make the semis, this time it was more comfortable. I am happy to have also won the fairplay award, people say you need to play hard. We showed you can play fair and still win it."

Asked what he would be doing now that he is not playing in the ODI series against West Indies, Dhoni said, "For the last four months I have not gone home. So I will now go to Ranchi and take rest."

Meanwhile, RCB captain Daniel Vettori conceded that 200-plus target was too much for his side to chase down on a pitch slowing down. "Would have been a much better game if we could have put up a bowling performance like yesterday, but it was not to be. I think 200-plus was tough for us, 160-170 would have been chaseable," Vettori said.

"We have lots of positives from the IPL this season. We topped the group in the league stage and that was an achievement. The dressing room atmosphere was great though we are a bit down now," he said.

Murali Vijay, who was adjudged man-of-the-match for his 52-ball 95, was happy that he contributed to his team's cause when it mattered the most.

"I was concentrating on just converting my start today, it hasn't always happened this season. This is a special unit to be part of," he said.

"I dedicate my MoM award to my mother. As for the Chennai crowd I love them all for their support."

RCB opening batsman Chris Gayle won the Orange Cap for maximum runs in the tournament -- 608 from 12 matches – while Mumbai Indians fast bowler Lasith Malinga got the Purple Cap for most wickets -- 28 from 16 matches.

Mumbai Indians player Kieron Pollard was awarded for taking most catches in the tournament while Kings XI Punjab batsman Paul Valthaty was handed the award for the Best Individual Performance in the IPL for his 120 against Chennai.

Kolkata Knight Riders bowler Iqbal Abdulla was adjudged rising star of the year while Punjab Cricket Association won the award for the best pitch and outfield.