IPL 10: Virat Kohli hopes to be back with a bang

Royal Challengers Bangalore skipper Virat Kohli is fit, and is all set to return to action in the IPL after missing out on the earlier games. He is set to feature in the match against Mumbai Indians on April 14.

Royal Challengers Bangalore skipper Virat Kohli is fit, and is all set to return to action in the IPL after missing out on the earlier games. He is set to feature in the match against Mumbai Indians on April 14.

“Now with me coming back and all specialist batsmen playing, the thinking might change back again. Bangalore has generally been a ground where you can chase down high totals and tomorrow being a day game obviously that really matters a lot because the wicket is better during the day time," Kohli was quoted as saying in a PTI report.

Speaking about the team performance, Kohli added, "We know we play good cricket at home but last year we won some really good matches away from home and that is why we reached the final, so in order to do that, that is the most important thing factor in IPL; we need to win away games. That is something that we will focus on through the season if we want to make it to the play-offs." 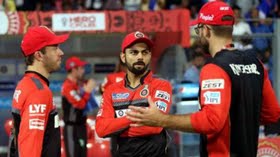 Kohli went on to hint that while both De Villiers and Gayle could feature in the match on Friday, Kedar Jadhav might keep wickets.

"Chris has always been a priority for us in the past so many seasons. Last game was a scenario where AB came in, Watto came in and other two guys were bowling well. I think that is why Chris was left out in the last game, but yes what works for us in Bangalore, we would go with the strongest combination possible. Chris is the top contender for us to be playing the home games," Kohli added.

Speaking about not travelling​ with the team in the first two games, Kohli explained, "Once you travel with the team, there is a lot happening and to focus on one guy is not fair. So you rather stay away and do your work. I just wanted to let the guys focus on their game and then do their work on the sidelines.”