Ravi Shastri. Assisting Shastri will be Zaheer Khan who was given the role of the bowling coach for the team while former India skipper Rahul Dravid was given the role of batting consultant for specific overseas tours.
Zaheer appointed bowling coach, Rahul Dravid overseas batting consultant
After days of speculation and a few false starts, on Tuesday night, Ravi Shastri was named as the next head coach of the Indian cricket team.
The mystery over the next coach of the Indian cricket team has finally ended as Ravi Shastri has been named as the head coach of the team. 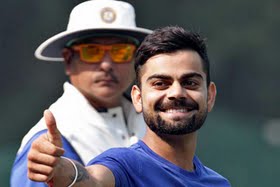 BCCI secretary Amitabh Chaudhary insisted that there was no decision yet, but was expected by the end of the day, Shastri, who has been in charge of the team twice before, was appointed for the next three years, till the 2019 World Cup.
“Besides Shastri as the chief coach, Zaheer Khan would be joining the team as its new bowling consultant. Rahul Dravid, who has been given charge of the India A and India Under-19 sides, would assist the team as batting consultant but only during overseas Test tours,” Choudhary confirmed to The Hindu.
However, it was not clear whether the decision was finalised after consultation with the captain Virat Kohli - as the Cricket Advisory Committee (CAC) consisting of Sachin Tendulkar, Sourav Ganguly and VVS Laxman had wished for a day earlier and confirmed by Ganguly - or gone ahead without it.
Shastri had been a frontrunner for the post ever since he officially applied for the job. Considered close to Kohli and enjoying a good relationship with the captain in his previous stint, the former India batsman was among the six candidates interviewed for the job. Virender Sehwag and Tom Moody were the other big names in the fray. Shastri had also previously coached the Indian side for a one-off away series against Bangladesh in 2007. He was the team director from 2014-2016 including the World T20 in 2016.
Shastri’s name had been unofficially confirmed by certain reports earlier in the day but Chaudhary had refuted all those as completely untrue. Only to confirm the news by the end of the day.
The position of coach was vacated after Anil Kumble resigned from the post after the end of the ICC Champions Trophy and decided not to re-apply. Kumble's decision was influenced by his deteriorating relationship with captain Virat Kohli as he confirmed on social media that he took the decision due to captain Kohli's reservations with his "style" and about him continuing as the head coach.
Ravi Shastri, during his tenure with the team as director had guided India to the semi-finals of the 2015 ICC World Cup and the 2016 ICC WT20. It was Shastri, who was at the helm of affairs, when Team India, under Kohli's leadership, blanked top ranked South Africa in a Test series at home.