India are in big time trouble in the Second Test at Sydney as Australia batted them out of the contest with a massive first innings lead of nearly 300 by Stumps on Day 2.

India are in big time trouble in the Second Test at Sydney as Australia batted them out of the contest with a massive first innings lead of nearly 300 by Stumps on Day 2. There are no signs of any declaration yet from the hosts as they lost only four wickets so far and the visitors are likely to be chasing leather for a third consecutive day in the Sydney Test.

Skipper Michael Clarke scored a maiden double century which he converted into an unbeaten 250 and also created the new record for the highest score by an Aussie at the Sydney Cricket Ground! Apart from that, Clarke got two back-to-back massive partnerships – first with Ponting which was 288 runs for the 4th wicket and then an unbroken stand for the fifth wicket with Michael Hussey which is worth 157 runs!

Australia by the close of the second day’s play have batted India out of the contest with a lead of 291 runs and thus leaving India towards a possible innings defeat with three full days left in the match. The entire evening session which consisted of 29 overs saw Australia piling up as many as 133 runs with Michael Clarke continuing his fluency and Hussey showing some aggression with a few full-blooded shots. 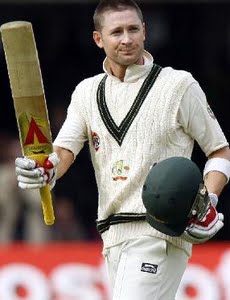 Australia collected 117 runs against a friendly Indian bowling attack in the whole of the afternoon session to find themselves in an unbeatable position in the Second Test. The Australian Skipper Michael Clarke is still there at the crease batting on a fluent 170 from 256 balls with 21 fours and a six. Giving him company is Michael Hussey who is on 8*.

Just the one wicket went down in the entire session that of former Captain Ricky Ponting but not before he had registered a 40th Test century. Ponting looking to drive a short of length delivery from Ishant Sharma on the up had spooned a catch to point. It was the second new ball that provided this breakthrough and putting an end to what was a massive 288-run stand for the fourth wicket! Ponting made 134 from 225 balls with 14 fours.

As many as 34 overs were bowled by Dhoni’s side in the post lunch session as the Indian Skipper used mostly Ashwin with part-timers Kohli and Sehwag. Australia are leading by 158 runs with plenty of time and batting resources left. The hosts will be looking to set this match for an innings victory.

Australia are in a strong position in the Sydney test after a good morning session in which there was not a single wicket lost. Runs came thick and fast as Australia eased to 236 for 3 thanks to the unbroken 199-run stand between Ricky Ponting and Michael Clarke.

The Australian Captain Michael Clarke reached his 18th Test century just at the stroke of Lunch while Ricky Ponting is waiting to reach a century, batting on 97 (from 142 balls with 11 fours). Clarke is on 103* from just 142 balls with 14 hits to the fence.

It was a tremendous session with Australia collecting 120 runs in just 27 overs in the morning. At Lunch, they are sitting pretty with a lead of 45 runs at a score of 236 for 3 in 53 overs.