The Highveld Lions will be challenging the Sydney Sixers at their den in The Wanderers in Johannesburg for the Champions League T20 2012 title.

The Highveld Lions will be challenging the Sydney Sixers at their den in The Wanderers in Johannesburg for the Champions League T20 2012 title. The Sydney Sixers have been on a roll winning five matches on the trot to reach the final that will be played tonight. Lions will be facing them after thrashing three star-studded IPL teams – Mumbai Indians, Chennai Super Kings and then the Delhi Daredevils in the Semis.

The Sydney Sixers with its strong bowling unit is the favourite to win the title though the Lions will be playing at their home ground in Wanderers which will be their advantage. The Lions will be getting plenty of crowd support as well and they have shown their ability to play together as a team and pull off upsets after upsets in this tournament. 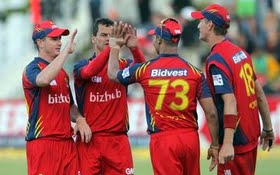 Both the Sydney Sixers and the Lions had played against each other during the league stage of the tournament. It was the Sydney Sixers winning the contest then. The Sixers could go into the match without their Skipper Brad Haddin who has a sore thumb. If the weather holds good like in the case of the two Semis, we could get a tight contest in the final as the two teams will be eyeing the jackpot prize of a stunning $2.5million!