After a hard fought Boxing Day Test at Melbourne, Australia and India now meet again tomorrow at the Sydney Cricket Ground which will be hosting its centenary Test.

After a hard fought Boxing Day Test at Melbourne, Australia and India now meet again tomorrow at the Sydney Cricket Ground which will be hosting its centenary Test. The First Test showed that both the sides had their share of problems, especially in the batting department.

The Aussies won the First Test by a handsome margin of 122 runs but most part of the match they were under pressure. The pace trio of both the sides looked superb and in the end it was the batting collapse from India that brought them a defeat on the fourth day.
Australia have gone ahead by naming an unchanged XI for tomorrow's Test. So all the talk about Skipper Michael Clarke going for the kill with a four-men pace attack has gone for a toss. Ryan Harris will do the 12th man duties as Nathan Lyon retains his place despite contributing just the wicket of no.11 Umesh Yadav in the First Test. The hosts are pleased to have their old war-horses Ricky Ponting and Michael Hussey back in form after their rescue act in the second innings of the MCG Test.
A couple of players in the Australian team are under pressure to keep their spots. Ed Cowan could be one of them as he scored a slow half century and followed it up by getting lbw cheaply by offering no shot to an inswinger. The left-handed rookie will have to fire with a good score if he has to edge out the likes of Simon Katich. Shaun Marsh at no.3 failed to get going in both the innings of the First Test, so he will be on the edge to cover up for those failures at Sydney. 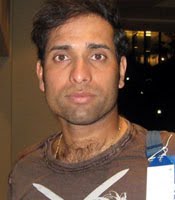 On the other hand, despite a defeat at MCG, India should feel confident for the second Test as Sydney has always been a better hunting ground for India. Two of its batsmen - Sachin Tendulkar and VVS Laxman have tasted great success at the Sydney Cricket Ground scoring three centuries each. India also holds the record of posting the highest ever total at this venue which is 705 for 7 declared on the 2003/04 tour with Tendulkar scoring 241* and Laxman scoring 178. There is a lot of pressure on VVS Laxman to fire in the Second Test as he had flopped miserably at the MCG with scores of 2 and 1.
Four batsmen failed to do anything for India in the first Test which includes Gambhir, Laxman, Kohli and Skipper Dhoni. Well its likely that Virat Kohli will be dropped for tomorrow's Test and will be replaced with another youngster Rohit Sharma. Though Rahul Dravid scored a half century in the first innings of the MCG Test, he seemed to be struggling with a new technical glitch in his game which the Aussie pace trio is exploiting. Dravid has looked very uncertain around the off stump and his defensive shots have looked very loose, so much that The Wall was bowled through the gate thrice in the First Test which also includes a Peter Siddle noball. There is news that Dravid has been working on rectifying his technique closely with Coach Duncan Fletcher and Trevor Penny, so let's hope he gets his act right in the coming matches.
As far as team changes are concerned for India, there could be just one with Rohit Sharma likely to make his Test Debut. Virat Kohli has to sit out atleast for playing right across the line in the very first ball he had faced in the Indian second innings at Melbourne. Gautam Gambhir hasn't scored many runs in his last few Tests and he could be under the scanner. Should he fail this time then India might have to look at the prospect of bringing in Ajinkya Rahane for Perth. Skipper MS Dhoni will have to do something to prove his batting abilities in the Test format especially outside the sub-continent.
The positives so far for India has been its bowling and with the exception of R Ashwin had looked pretty good in the first Test. Ashwin will have to get his lengths right to complement the pace trio of Zaheer, Umesh Yadav and Ishant. Although Pragyan Ojha will be a tempting option for India, he might have to wait for his chance as Ashwin brings in the extra value to the side because of his capable batting lower down the order.
The pitch at the SCG is expected to aid the seam bowlers so it will be another test for the techniques of the batsmen in both the sides. Weather looks fine for the opening day's play but there are chances of showers on the second, third and fourth days of the Test Match.
Teams :
Australia Playing XI : David Warner, Ed Cowan, Shaun Marsh, Ricky Ponting, Michael Clarke (Captain), Michael Hussey, Brad Haddin (Wicket Keeper), Peter Siddle, James Pattinson, Nathan Lyon and Ben Hilfenhaus
India Likely Playing XI : Virender Sehwag, Gautam Gambhir, Rahul Dravid, Sachin Tendulkar, VVS Laxman, Rohit Sharma, MS Dhoni (Captain & Wicket Keeper), R Ashwin, Zaheer Khan, Ishant Sharma and Umesh Yadav