Sri Lanka are in the driver’s seat in the Pallekele Test thanks to a heroic knock from Thisara Perera followed up by an early Pakistani wicket. By the close of play on Day 3, Pakistan are 27 for 1 in 6 overs having conceded a first innings lead of 111 runs.

Stumps on Day 3: Sri Lanka are in the driver’s seat in the Pallekele Test thanks to a heroic knock from Thisara Perera followed up by an early Pakistani wicket. By the close of play on Day 3, Pakistan are 27 for 1 in 6 overs having conceded a first innings lead of 111 runs.

Taufeeq Umar (4) was the casualty from the Pakistani camp after he was wrongly adjudged lbw by Simon Taufel to a delivery that had pitched outside leg. Earlier in the session, Pakistan took the second new ball as and when it was available and Umar Gul struck straightaway hitting the pad of Prasanna Jayawardene (20) plumb infront. 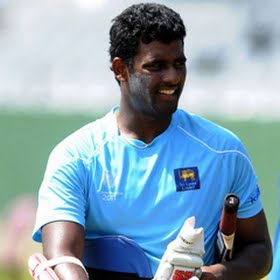 The hosts were reduced to 236 for 7 with a lead of just 10 runs when Nuwan Kulasekara joined Thisara Perera. Both the lower order batsmen decided to attack the second new ball to pile up useful runs for the Lankans. Perera brought up his maiden Test fifty and found able support from Nuwan Kulasekara, who was determined to keep away the good ball and score runs whenever he got anything loose. The 8th wicket partnership added as many as 84 runs before Kulasekara (33 from 63 balls with 4 fours) got caught behind in a loose drive off Junaid Khan.

Pakistan without much fuss took the remaining two wickets to bowl out Sri Lanka for 337 in 100.2 overs. First, Rangana Herath was trapped lbw by Saeed Ajmal with a doosra while Thisara Perera (75 from 86 balls with 4 fours and 3 sixes) was last man out when he was clean bowled through the gate by a length delivery from Junaid that had nipped back. Junaid Khan finished the Sri Lankan innings with a 3rd five-wicket haul of his short career.

Tea on Day 3: Pakistan regained some control by Tea after reducing Sri Lanka to 220 for 6. This was after Saeed Ajmal took the two important wickets of Samaraweera and Paranavitana. Sri Lanka are now trailing behind by six runs with all the hopes wresting on Prasanna Jayawardene and Thisara Perera to give them a handy first innings lead.

Sri Lanka were going strongly at the start of the second session with Thilan Samaraweera and Tharanga Paranavitana continuing their partnership. It was only somewhere in the middle of the session that Pakistan eventually found their breakthrough when Saeed Ajmal, coming from round the sticks trapped Thilan Samaraweera (73 from 160 balls with 9 fours) lbw with one that straightened. Ajmal with that broke a crucial fourth wicket stand which added 143 runs.

The hosts lost another wicket in no time when Angelo Mathews (9) played a loose backfoot drive off Junaid Khan to get caught at gully. By Tea, Saeed Ajmal delivered another blow when a well set Tharanga Paranvitana (75 from 188 balls with 8 fours) chopped a cut shot onto the stumps.

Lunch on Day 3: The overnight pair of Tharanga Paranavitana and Thilan Samaraweera battled it out superbly against some top quality seam and swing bowling to keep Sri Lanka in safe position. At Lunch on Day 3, Sri Lanka are steadily placed at 142 for 3 in 44 overs with a first innings deficit of just another 84 runs.

Both Paranavitana (52*) and Samaraweera (45*) were beaten a number of times by Junaid Khan and Umar Gul but the luck was with them. The two overnight batsmen saw through 25.5 overs this morning to score 96 runs while keeping their wickets intact.

Build Up to Day 3: All looks fine for a prompt start at 9:45 AM on Day 3 of the rain-affected Pallekele Test. Yesterday saw rain washing out the entire day’s play to leave just three more days for both the teams to fight out for a result. Sri Lanka will resume this morning at a shaky Sri Lanka at 44 for 3 in reply to Pakistan’s 226.