Kings XI Punjab eased to a 5-wicket win over Hobart Hurricanes with 14 balls to spare at Mohali. It was a fine bowling effort from Kings XI Punjab that set up this comfortable victory.

The Hobart Hurricanes did not get going at all in their innings and had to settle for a modest total of 144 for 6. Not one batsman could score a fifty and the highest score of the innings was just 28. The best batsman was Jonathan Wells who timed the ball sweetly for an 18-ball 28 which was cut short by a run out.

For KXIP, Anureet Singh who opened the bowling and also bowled the penultimate over was very impressive in his 4-0-25-0. Akshar Patel did well for his 1 for 20 in 4 overs while Thisara Perera came up with 2 for 17 in 3 overs.

The run chase for Kings XI Punjab couldn’t have got off to a worst start with Virender Sehwag upper cutting the very first ball from Doug Bollinger to thirdman. Hurricanes got on top when they got three more wickets to reduce Kings XI Punjab to 51 for 4 by the 8th over. They were two ducks already for Kings XI in the form of Sehwag and Miller.

Glenn Maxwell got things back in shape for the homeside by smashing 43 from 25 balls with 4 fours and 2 sixes. The experienced duo of Captain George Bailey with 34 not out (from 27 balls) and Thisara Perera with 35 not out (from 20 balls) took the Kings XI home with their sixth wicket stand.

Toss and Teams: Kings XI Punjab led by George Bailey have won the toss and asked the Hobart Hurricanes to bat first in Match 2 of CLT20 2014 at Mohali. There is a bit of grass cover on the pitch and the ball could seam around. 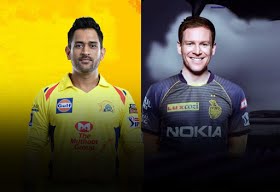 Oct 28, 2020: Chennai Super Kings may have been knocked out of IPL 2020, but they can still play spoilsport as far as the chances of other teams are concerned. They will face Kolkata Knight Riders in match number 49 of IPL 2020 at Dubai on Thursday. KKR are still in contention with 12 points from as many games, and need to win the next two matches to ensure qualification for the play-offs. CSK are at the bottom of the points table and would not like to finish there. Hence, they have a lot of pride to play for.