Aussie big hitter Glenn Maxwell smashed a brilliant unbeaten 145 from 65 balls in the first T20 against Sri Lanka at Pallekele on Tuesday, Maxwell hit 14 fours and 9 sixes at a smashing strike rate of 223.07. This is now the second highest individual score in T20 internationals, after Aaron Finch, the man he incidentally replaced as opener in the game. 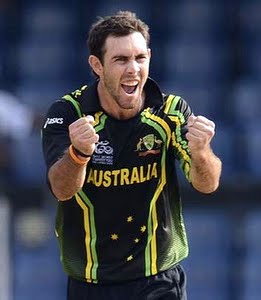 Here’s a look at the other top 10 highest individual scores in T20s.

Shane Watson (124 not out): Watson smashed an unbeaten 124 from 71 balls, with the aid of 10 fours and 6 sixes in the third T20 against India at Sydney on January 31, 2016. Unfortunately, the Australians went on to lose the match as the Indian batsmen chased down 198 to win with utmost ease.

Babar Hayat (122): The Hong Kong batsman hit 122 from 60 balls with nine fours and seven sixes at a strike rate of 203.33 against Oman on February 19, 2016. The innings came during the second innings of Asia Cup Qualifying round. Despite Hayat’s heroics, Hong Kong ended up going down to Oman by five runs, failing to chase 181.

Faf du Plessis (119): The South African batsman hit 119 from 56 balls against West Indies at Johannesburg on January 11, 2015. Du Plessis hit 11 fours and 5 sixes in his knock as the Proteas posted 231, but lost the match by four wickets.

Chris Gayle (117): The maverick West Indian had to be part of the list. Gayle blitzed 117 from 57 balls against the South Africans at Johannesburg on September 11, 2007, in what was the inaugural match of the 2007 World T20. Gayle hit 7 fours and 10 sixes in his knock as Windies posted 205, but lost by eight wickets.

Brendon McCullum (116*): The Kiwi skipper makes an entry again. His unbeaten 116 from 56 balls came against Australia at Christchurch on February 28, 2010. McCullum hit 12 fours and 8 sixes as the Kiwis posted 214. Australia equalled the score before New Zealand won the eliminator.