After India lost the third T20 against South Africa at Bengaluru, captain Virat Kohli admitted that some confusion was created over who would come out to bat at number four

After India lost the third T20 against South Africa at Bengaluru, captain Virat Kohli admitted that some confusion was created over who would come out to bat at number four, as both Rishabh Pant and Shreyas Iyer emerged from the dressing room.

Following Shikhar Dhawan's dismissal in the eighth over, a bizarre situation occurred as both Pant and Iyer thought they were supposed to come in next. At the post-match presentation, Kohli explained that the number four batsman was to be decided based on a number of overs left and hence the confusion ensued.

"I think there was a miscommunication there. That's what I understood afterward. The batting coach had had a word with both of them and there was a misunderstanding of who has to go at what stage. It was a little funny as well afterwards, they both wanted to walk in. It would have been very funny if both reached the pitch, three batsmen in the field! I think it was a miscommunication at that stage," Kohli said at the post-match presentation ceremony. 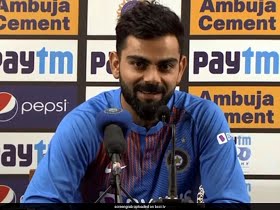 Explaining what was the plan of action, Kohli added, "We had planned according to phases. After 10 overs, we decided Rishabh would come in. Before that Shreyas had to walk in. I think both got confused and didn't realize who has to walk in at which stage. That was a miscommunication there," the Indian captain admitted.

India was thrashed by South Africa by nine wickets on Sunday after Kohli won the toss and decided to bat first at a venue conducive for chasing due to the small size of the ground. Kohli, however, explained that the whole idea was to put the team out of the comfort zone as they build-up to next year's World Cup.

"Yes, we wanted to go for a big score, exactly why we batted first. In the past, we've felt we've been 20-30 runs short batting first in T20I cricket which has cost us the game. The idea was to come out of our comfort zone and try to get that big score because we're batting till No. 9. But we quickly realized the pitch didn't allow us to do that," Kohli said.

"The start we got, I think we could have reassessed to 170 instead of thinking of 200. The pitch didn't allow us to get to that total. We kept losing wickets, not taking anything away from South Africa. They bowled the right areas, it was a combination of good bowling, not great decision making. But this kind of games will keep happening, as long as we're wanting to come out of our comfort zones as a team and putting ourselves in situations which could be the case in big games in big tournaments, that's the idea behind it," Kohli went on to explain.

India and South Africa now move on to the three-Test series, with the first Test starting at Visakhapatnam on October 2.