Australia on top after bowling out India for 191 : Match Report of Aus Vs Ind, Day 1, 2nd Test at Sydney

Australia recovered nicely to 116 for 3 in 26 overs by Stumps on Day 1 of the Second Test at Sydney. Zaheer Khan brought India back in the game taking three quick wickets with the new ball but a solid partnership between Former Skipper Ricky Ponting and Michael Clarke...

Australia recovered nicely to 116 for 3 in 26 overs by Stumps on Day 1 of the Second Test at Sydney. Zaheer Khan brought India back in the game taking three quick wickets with the new ball but a solid partnership between Former Skipper Ricky Ponting and Michael Clarke eased Australia out of trouble and cutting down the deficit to just the 75 runs. It was a busy first day’s play at the SCG with 13 wickets falling down to the pacers.

The Aussies too lost a wicket in the very first over of their innings like India. David Warner (8) was removed in the last ball of the first over by Zaheer who drew him forward, angled it in and swung it away late for a thick edge. VVS Laxman at second slip spilled that edge but luckily for India, Sachin Tendulkar at first slip managed to catch the deflection off Laxman’s hands.

Zaheer with the next ball of his spell, which was the start of the 3rd over got a tentative Shaun Marsh edging a cover drive off a well pitched up away swinger to Laxman at second slip who held onto a sharp catch. Marsh was gone for a first ball duck. It was the fifth duck of the day’s play!

In the 9th over, Zaheer struck again when the left-handed Ed Cowan paid price for attempting a flick way across the line to be given out lbw. Zaheer got his length delivery to swing in from outside off and Cowan (16) in a flick across his frontpad got struck on the pad infront of middle. Australia were pegged back at 37 for 3 when Skipper Clarke joined Ponting. The experienced duo settled down well despite getting beaten every now and then by the seamers. The pitch flattened down towards the end of the day and the pair consolidated Australia to a steady position.

Michael Clarke was the better of the two batsmen as he got 47* from 59 balls with 7 fours. Clarke hit three consecutive fours off Umesh Yadav in one particular over. Clarke’s partner Ricky Ponting helped himself to 44* from 62 balls with 5 fours.

India have been bowled out for 191 just under 30 minutes after the Tea Break. Skipper MS Dhoni helplessly remained unbeaten on 57 (from 77 balls with 8 fours) which is his maiden Test fifty on Australian soil.

Ishant Sharma was the first to fall after the Tea Break when he fended off a nasty lifter from Hilfenhaus off the glove to shortleg. The final wicket was taken by Siddle when he had Umesh Yadav nicking his away going delivery to the keeper. It was the 100th Test wicket for Peter Siddle. Both Ishant and Umesh Yadav fell for ducks making it as many as four ducks in the Indian innings.

Australia have a couple of hours or maximum 28 overs to bat in the evening session on Day 1.

India hopes of posting a competitive total in their first innings are diminishing quickly as the Aussies added four more wickets in the afternoon session. This has left the visitors at 178 for 8 in 54.3 overs with Skipper MS Dhoni (44*) left with the no.10 and 11!

The afternoon session had started with Virat Kohli (23) edging a bouncy length delivery from Siddle into the keeper’s gloves as India slipped to 96 for 5 in 33 overs. A well set Tendulkar (41 from 89 balls with 8 fours) dragged a cover drive off a full length inswinger from Pattinson onto his stumps in the 41st over.

The visitors finally found a gritty partnership taking place with MS Dhoni and R Ashwin looking to stage a fightback. Ashwin was very impressive like in the first Test and Dhoni for the first time was doing something significant. Just after this partnership had crossed a fifty, Ashwin (20) lost his wicket when he in a backfoot flick off Hilfenhaus was caught at first slip with a leading edge. The very next ball, Zaheer Khan couldn’t get away from a nasty lifter from the same bowler which smashed his glove and flew straight to shortleg.

Hilfenhaus will be on a hat-trick having taken two wickets in two balls at the stroke of Tea. Skipper Dhoni (44* from 63 balls with 5 fours) is the only hope for India to cross atleast 200. For the record, the Indian Skipper had gone past his previous highest score of 39 in Tests in Australia. 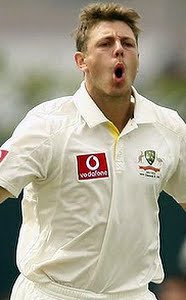 It was yet another batting failure for India in overseas Test matches in the recent times. Sydney wasn’t any different as the tourists lost four wickets in the morning session to find themselves on the backfoot. India at lunch are struggling at 72 for 4 in 26 overs with only Sachin Tendulkar (21*) looking good so far with his unbeaten innings.

India’s problems started with an out of form Gautam Gambhir edging the third ball of the match to first slip off Pattinson. It was a short of length delivery pitching on middle and leg, and Gambhir closing the face of the blade to tuck it to the onside was out with a thick edge for a duck!

There was a brief session where things looked better for India with Sehwag and Dravid but it lasted only till the 11th over. Rahul Dravid (5) was caught bat pad off an inside edge at short leg while trying to push a length ball from Peter Siddle on the frontfoot.

At 30 for 2, Tendulkar joined Sehwag and everything started to look fine and the runs began to flow. However, Sehwag (30 from 51 balls with 4 fours) was sent back to the pavilion when he edged a length outswinger to the keeper with Pattinson getting the ball to angle in and leaving the right hander late in the 19th over. VVS Laxman who has three centuries at this venue lasted only 9 balls before he was sucked into a false drive to a well pitched up outswinger from Pattinson which ended up into a thick edge to third slip where Skipper Clarke took a good catch.

By Lunch, India settled with four wickets down for 72 with Tendulkar looking good on 21* from 44 balls (with 4 fours) alongside young Virat Kohli, who is on 12*.

India have won the toss and elected to bat first in the Second Test at the Sydney Cricket Ground. Surprisingly, India has retained the same XI that lost the First Test at Melbourne. It means that Virat Kohli keeps his place in the side leaving Rohit Sharma once again on the bench. The Aussies had announced the same XI a day before the Test Match.

Well the pitch is expected to aid seam bowling for a couple of hours at the start and then could ease out into a batting pitch. There is even covering of grass, so the bounce should be true.