Earlier, West Indies won the toss and invited Sri Lanka to bat first. The condition and pitch was fabulous for the batters and home team made full use of that. Kushal Perera and Tillakaratne Dilshan added 91 runs for the first wicket and given their team a destructive start. Perera scored 47 runs off 30-balls with the help of six boundaries and one six whereas 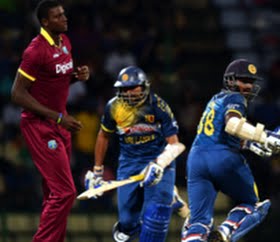 Dilshan was the top scorer for Sri Lanka with 56-runs off 37 deliveries. All Sri Lankan batsmen got good start and contributed significantly. Came in to bat at No. 3, Jayasuriya scored quick 36 runs off 22 balls. But it was the inning of Angelo Mathews which powered Sri Lanka score beyond 200 mark. When Mathews walked in to bat in the 17th over, the score was 155 and 190 was looking a reasonable score. But when he hit four sixes and two boundaries in the end Sri Lanka ended up getting 215 in their 20 over. West Indies conceded 78 runs in the last six over where Mathews and Chandimal take the toll of the bowlers.

Andre Fletcher scored quick half century for West Indies but rest of the batsmen couldn’t hang around and gifted their wickets away against Sri Lankan spinners. Though Sachithra Senanayaka was expensive but he picked up four wickets. Milinda Sriwardana got two wickets and Shehan Jayasuriya one. West Indian batting was a huge disappointment. They reached 185 runs but none of their batsmen could manage significant score other than Fletcher. Most of the batsmen got the start but was not able to convert the start into a big inning. Their batsmen came and played some big shot and then got out. That’s why required rate was not a big issue for them but they lost too many wickets early in their inning which left too much to do for the lower order batsmen.

The second T20 will be played on 11th of November.