So, we had a one sided contest here in Dubai as the Kings XI Punjab absolutely thrashed the Royal Challengers Bangalore in all three departments of the game to win the match by a whopping margin of 97 runs.

It was the RCB who won the toss and elected to field first. For Punjab, skipper KL Rahul and in form Mayank Agarwal came to bat. They gave their side a solid start, reaching the score of 50-0 after the powerplay. Chahal then came into the attack and bowled Agarwal with a googly that he failed to read. Umesh Yadav was bowling wayward line and length and gave away 20 runs in the 10th over as Rahul was playing the anchor role with a few calculated risks and new Batsman Pooran tried to go for the big shots. Navdeep Saini and Dale Steyn too weren’t at their best as Punjab were easily managing a run rate of 8-9 runs per over. 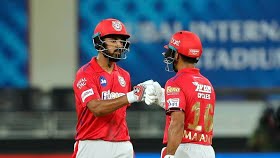 Shivam Dube, who came into the attack in the 14th over, struck immediately with his very first delivery as he got rid of Pooran with a slower delivery. However, that didn’t stop Rahul from playing some of his trademark elegant shots. Maxwell came and went without troubling the scorers too much as the onus to finish the innings fell completely on Rahul’s shoulders. And boy did he deliver ! Dropped twice though, both times by his counterpart Kohli and he made sure to make his fortune count. He went berserk and smashed Steyn for 26 runs in the penultimate over as he brought up his second IPL century. By the time their innings closed, Rahul had scored the highest score by an Indian in IPL, the highest score by a captain in IPL, and his team had scored 74 runs in the last 4 overs of the innings to finish strong at 206-3.

Chasing 207 to win, RCB had a terrible start as they lost Padikkal, Phillipe, and skipper Kohli inside the first three overs as Cottrell and Shami breathed fire with the ball. Their score read 5-3 at the end of 3 overs. Finch and ABD did give them some slight hopes of a comeback but were undone by the leg spin duo of Bishnoi and Murugan Ashwin.

With the score at 57-5 around the 8 over mark and all the marquee batsmen back in the hut, the game was all but over. Still, Shivam Dube and Washington Sundar tried to delay the inevitable. However, they also gave away their wickets to Bishnoi and Maxwell as an early finish seemed to be on the cards. Ashwin and Bishnoi came back to wrap up the innings as RCB folded for 109 with both the leggies picking up 3 wickets apiece.