Ben Stokes is an all-rounder to watch out for

It took a long time coming, but England finally registered their first win on the tour of Australia. It was the kind of polished performance that fans had been expecting of the team all along.

It took a long time coming, but England finally registered their first win on the tour of Australia. It was the kind of polished performance that fans had been expecting of the team all along. It came a bit too late in the day, but better late than never. For a change, with both bat and ball, England were superior to the hosts at Perth. Of course, it helped that Australia were without a couple of their key players, but a win is a win at the end of the day.

The match saw Ben Stokes demonstrate what a good all-round talent he is. Coming in to bat at number three, he made a stroke-filled 70 with six fours and one six. The best part of his innings was that he looked fluent all along. Then, with the ball as well, Stokes was on top of his game. His four strikes were crucial in derailing Australia’s chase after they had gotten off to a swift start. Stokes showed his capability with the bat when he came up with a hundred in one of the Tests, but at Perth on Friday, he exhibited his all-round talent, and is definitely one to watch out for. 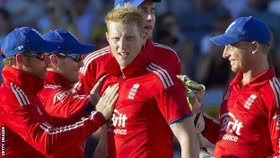 Throughout the tour, England had been struggling because their batsmen just couldn’t get the big scores. No one got a hundred at Perth as well, but there were many significant contributions that enabled England to cross the 300 mark. Alastair Cook made 44 and Ian Bell 55 as they gave the visitors a great start. In earlier games, these starts wouldn’t have counted for much, but in this game it did for the rest of the batsmen also chipped in to ensure that the team finished with a healthy total.

Apart from Stokes’ 70, Jos Buttler also came up with an incredible knock. In fact, it was his blitzkrieg of 71 from 43 balls that helped England march towards a big total in the end overs. In the few games that Buttler has played for England, the wicket-keeper has shown the ability to play quick cameos. Impressively, he has been consistent with his run-scoring. At Perth though he went one step ahead and played an innings of pure brilliance, which went a long way in helping England secure their maiden win of the otherwise embarrassing Australian tour.

England were aided by the fact that Australia did not field skipper Michael Clarke and David Warner. But, their bowling effort was praiseworthy nonetheless, which is why they ended up victorious in spite of Aaron Finch’s ton. While Stokes was the best of the England bowlers, he was very well supported by Tim Bresnan and Stuart Broad, who contributed to pick up five wickets between themselves. For a change, the Australian batsmen couldn’t build on their starts, as a result of which the team has lost the opportunity to clean sweep the Englishmen in the ODIs as well.