England fast bowler Jofra Archer has revealed that he has misplaced his World Cup 2019 after shifting to a new flat. Archer bowled the Super Over against New Zealand at Lord’s, which won England their maiden World Cup title. He has stated that he has gone mad searching for his coveted medal.

According to Archer, his World Cup 2019 medal was hanging on a portrait. However, the same has not been visible ever since the fast bowler moved to his new residence. The impressive England pacer revealed that he has been looking for the medal for the past week. 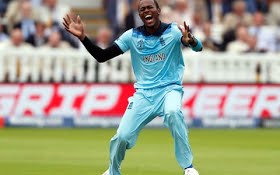 "I had it hanging off a portrait someone did for me and sent to me, I had my medal hanging on that. I moved flat and the picture is on the new wall but there's no medal," Archer told the BBC.

"I turned the house upside down for about a week but I still haven't managed to find it. I know it should be in the house so I will keep eyes out for it but I've gone mad looking for it already," the Barbados-born cricketer added.

Speaking about the World Cup, Archer put up a highly impressive show in his maiden appearance in cricket’s premier tournament. He made the ball talk with his pace and bounce, and finished the event with 20 wickets, the third most successful bowler in the tournament.

In fact, the World Cup win for England depended heavily on Archer, as he was given the responsibility to bowl the Super Over in the final. Although Archer was smashed for a six by Jimmy Neesham, he held his nerve and conceded only one with two needed for the Kiwis to win off the last ball. The scores were tied, but England were controversially declared winners based on the boundary count rule.

Reliving the Super Over experience, Archer stated that he hadn’t planned anything, and that it just happened. "I wasn't sure until I had to go down there and warm up. That doesn't mean I didn't want it, I just didn't think I was in a position to volunteer, I was just coming into the team, I'd played the least amount of games in the squad. I didn't think it was my time to volunteer. It was the only super over of the whole tournament, I never actually thought about it or planned for the situation, it just happened," the 25-year-old recalled.