Fall of Wickets on Day 1 : Aus Vs Ind, 2nd Test at Sydney

In yet another eventful day of cricket between Australia and India in the Border-Gavaskar Trophy, as many as 13 wickets fell down. On the opening day’s play of the 2nd Test at the Sydney Cricket Ground...

In yet another eventful day of cricket between Australia and India in the Border-Gavaskar Trophy, as many as 13 wickets fell down. On the opening day’s play of the 2nd Test at the Sydney Cricket Ground, Australia recovered after three early blows from left-armer Zaheer Khan to reach 116 for 3 by stumps. Earlier in the day, young fast bowler James Pattinson wrecked the Indian top order taking four wickets. His colleagues Ben Hilfenhaus and Peter Siddle joined the party taking three wickets each as India folded to 191 all out after electing to bat first having won the toss.

Here’s the highlights of how those 13 wickets went down on Day 1 of the Second Vodafone Australia Vs India Test Match at the Sydney Cricket Ground :

Over 0.3 JL Pattinson to G Gambhir, CAUGHT, got him Gambhir fails again, and consumed in the slips! He is on the backfoot, closing the face of the blade to tuck it to the onside, and the ball which pitches around leg and middle nips away taking an edge straight to first slip! G Gambhir c Clarke b Pattinson 0 (3b 0x4 0x6) India 0/1 (0.3 Overs)

Over 10.3 PM Siddle to RS Dravid, CAUGHT, Dravid is gone, caught at shortleg! Its a length delivery which was nipping back and Dravid pushing at it gets an inside edge onto the thighpad which flies straight to Cowan at shortleg. R Dravid c Cowan b Siddle 5 (33b 1x4 0x6) India 30/2 (10.3 Overs)

Over 18.2 JL Pattinson to V Sehwag, CAUGHT, and Sehwag is gone, pokes at a length delivery which was nipping away and his feet were struck in the crease. Its a regulation catch for the keeper. That delivery pitched on off and swung away late with a bit of bounce and Sehwag instead of coming forward played from the crease. V Sehwag c Haddin b Pattinson 30 (51b 4x4 0x6) India 55/3 (18.2 Overs)

Over 20.5 JL Pattinson to VVS Laxman, CAUGHT, Laxman is sucked up into a false drive, well away from his body and he gets nicely caught by the diving third slip! It was a pitched up delivery which was swinging away late and it was a poor loose drive from VVS to get a thick edge. VVS Laxman c SE Marsh b Pattinson 2 (9b 0x4 0x6) India 59/4 (20.5 Overs)

Over 32.6 PM Siddle to V Kohli, CAUGHT, and another one edges it behind for India. Kohli gets forward and is forced to play at this length delivery around off which nipped away with the extra bounce and takes an outside edge to the keeper. V Kohli c Haddin b Siddle 23 (41b 3x4 0x6) India 96/5 (32.6 Overs)

Over 40.5 JL Pattinson to SR Tendulkar, BOWLED HIM, the biggest blow of the day, Sachin is gone dragging his drive onto the stumps! Sachin was bending down to drive a full ball through covers but only to drag it onto the stumps with an inside edge! That was an inswinger from Pattinson! SR Tendulkar b Pattinson 41 (89b 8x4 0x6) India 124/6 (40.5 Overs)

Over 54.2 BJ Hilfenhaus to R Ashwin, CAUGHT, breakthrough for the Aussies, Ashwin looks to go back for a flick around off and middle, and gets a leading edge which is caught at first slip. That delivery swung away late from Hilfenhaus. R Ashwin c Clarke b Hilfenhaus 20 (39b 1x4 0x6) India 178/7 (54.2 Overs)

Over 54.3 BJ Hilfenhaus to Z Khan, CAUGHT, this is a nasty rising delivery following Zaheer around middle, he looks to duck down but the ball skids through to smash his glove and flies straight to shortleg! And that's also Tea on Day 1 and Hilfenhaus will be on a hat-trick after Tea! Z Khan c Cowan b Hilfenhaus 0 (1b 0x4 0x6) India 178/8 (54.3 Overs)

Over 56.3 BJ Hilfenhaus to I Sharma, CAUGHT, nasty bouncer from Hilfenhaus right onto the face of Ishant and all he can do is to glove it softly and blindly to Cowan at shortleg! I Sharma c Cowan b Hilfenhaus 0 (6b 0x4 0x6) India 186/9 (56.3 Overs)

Over 59.3 PM Siddle to U Yadav, CAUGHT, 100th Test wicket for Siddle, he hits the pitch hard with a short of length delivery which nips away around middle to take an edge from Yadav and its a simple catch for Haddin. Well Umpire wants to check for the noball but no problems for Siddle, he gets his footing right. So India bowled out for 191. The Aussies have a maximum of 28 overs to bat this evening. U Yadav c Haddin b Siddle 0 (10b 0x4 0x6) India 191/10 (59.3 Overs) 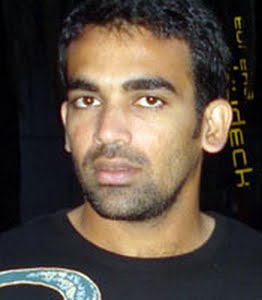 Over 0.6 Z Khan to DA Warner, CAUGHT, beautiful bowling from Zak and he induces the edge from Warner, edge flies to second slip where Laxman can't hold onto that but the ball deflects straight to Sachin at first slip who is alert enough to take it! Warner was squared up with the ball angling in at length but swinging away late to force an edge. DA Warner c Tendulkar b Khan 8 (6b 1x4 0x6) Australia 8/1 (1.0 Overs)

Over 2.1 Z Khan to SE Marsh, CAUGHT, fifth duck out of the day, Marsh falls for a false drive, looks at a juicy pitched up delivery, goes for a tentative cover drive and the magical away swinger takes a healthy edge to Laxman at second slip who makes no mistake this time! SE Marsh c Laxman b Khan 0 (1b 0x4 0x6) Australia 8/2 (2.1 Overs)

Over 8.5 Z Khan to Ed Cowan, OUT LBW, Zak breaks the partnership, Cowan paying price for playing right across the line! It was a good length delivery swinging back from outside off, and Cowan got forward and across to whip it to the onside, but only to get hit on the pad infront of off! EJM Cowan lbw b Khan 16 (28b 2x4 0x6) Australia 37/3 (8.5 Overs)