The Australia batsman, David Warner revealed on Saturday, that it was swashbuckling India opener, Virender Sehwag, his skipper at Delhi Daredevils in the Indian Premier League

The Australia batsman, David Warner revealed on Saturday, that it was swashbuckling India opener, Virender Sehwag, his skipper at Delhi Daredevils in the Indian Premier League, who told him that he could be a good player in the longer format of the game rather than a Twenty20 player.
"Sehwag told me two years ago he saw me as a better four-day player than Twenty20 player,'' said Warner while talking to a leading Australian sports journal.
''He said, 'If you play with your freedom, and your shot selection is correct and your decision-making's good, you're always going to score runs in that form of the game if conditions favour you,” he added further. 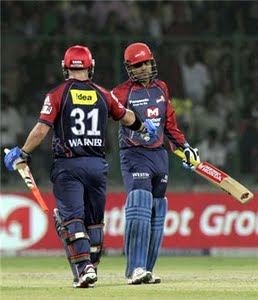 The 24-year-old New South Wales cricketer was considered to be a good limited-overs player. After debuting in the limited overs format of international cricket in January 2009, Warner had played only four first-class matches for his state with a highest score of only 48 runs.
He scored his maiden first-class century against Western Australia earlier this year, soon after missing out on a ton against Victoria, where he was sacked at 99.
The right-handed opening batsman’s effort got Cricket Australia selectors nod as he got a call up to the Australia A squad for a four-day series.
Warner has played seven One Day Internationals and 25 Twenty20 Internationals for Australia and is yet to debut in the Test format. He said that he was happy to be acknowledged for the last couple of games he played for New South Wales in the 2010-11 Sheffield Shield tournament.
''It's recognition for myself that they're actually looking at me as a Test player,” said the right hander. “I can last the distance, and mentally I can be patient enough to tackle that format of the game. It's good I scored runs and showed some people,” he added further.
National selector, Greg Chappell, has also expressed confidence in Warner as a Test player and hoped he can improve his game in the longest format of cricket.
Warner’s New South Wales skipper, Stuart Clarke, also believes the batsman has the potential to remove the tag of a short-format specialist by proving himself in the first-class cricket.