The Fourth ODI between Australia and Sri Lanka was controversially abandoned at the Sydney Cricket Ground just 45 minutes after a light shower had completely stopped.

The Fourth ODI between Australia and Sri Lanka was controversially abandoned at the Sydney Cricket Ground just 45 minutes after a light shower had completely stopped. Sri Lanka who were just the one win away from sealing the 5-match series had a great chance as they had restricted the Aussies to 222 and in an over-curtailed situation were the favourites to chase down a reduced target. However, it was the two Umpires – Paul Reifell and Marais Erasmus who reckoned that the outfield wasn’t ready for resumption of play. Sri Lanka have strongly protested the Umpires’ decision and have lodged an official complaint stating that just three months ago they had played in far worse conditions. Just when the Sydney ODI was about to resume, came the shocking news that the match was abandoned amidst huge boos from the surprised spectators. 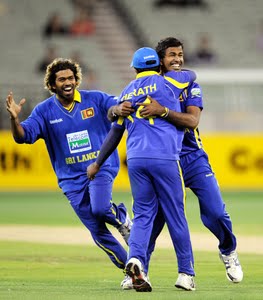 Under overcast conditions, Australia decided to bat first after winning the toss while retaining the same XI that was bundled out for just 74 at the Gabba. A repeat of a batting failure was on the cards as the new balls moved around beautifully from Nuwan Kulasekara and co. before Warner and Clarke turned things around. When Michael Clarke (20) was lbw to a sharp indipper from Kulasekara at 50 for 2 in 10 overs, the Australian started to have a batting collapse yet again. Lasith Malinga had David Hussey caught behind, Herath sustained the pressure to have Bailey lured into a slog to reduce the hosts to 93 for 4.

Australia suffered further when a well settled David Warner (60 from 73 balls with 6 fours) and Moises Henriques were wrongly given out lbw to inside edges onto the pad which had the score down to 130 for 6. Matthew Wade got some runs, 31 (from 53 balls) to get some respectability to the score. Australia were 182 for 5 in the 46th over when Mitchell Starc was joined by last man Xavier Doherty. The last wicket pair went onto 30 more runs to push the Australian total to a healthy 222 for 9 in 50 overs. Mitchell Starc finished with a sensational unbeaten knock of 52 from just 37 balls with 7 fours which gave more than a chance for the Aussies to win the match.

For the Lankans, Kulasekara led the way with 10-2-30-3. Malinga, Perera and Herath chipped in with two wickets each. Sri Lanka in the 3.2 overs before the rain had come down were 14 for no loss. There was no further play after that although it wasn’t really bucketing down at the SCG. However, according to the groundstaff, there was hardly any breeze to help things dry up while the water had not sunk into the soil but remained on the grass blades.