MS Dhoni’smen hardly put a foot wrong as they went 2-0 up following their smashing innings victory over the hapless Aussies at Hyderabad. It was the kind of performance that would reinstate some of the lost faith in Team India and their ability to dominate at least in home conditions.

MS Dhoni’smen hardly put a foot wrong as they went 2-0 up following their smashing innings victory over the hapless Aussies at Hyderabad. It was the kind of performance that would reinstate some of the lost faith in Team India and their ability to dominate at least in home conditions. The win is also psychologically a big one for the hosts since they cannot lose the series from hereon. Also, looking at the kind of dominant form they have shown in the two Tests so far, only complacency can allow Australia to make a comeback now.

India would have been slightly worried after Australia won the toss and decided to bat first. It is no secret that pace is India’s weak link and both Ishant Sharma and Bhuvneshwar Kumar went into the Test after having been wicketless at Chennai. Had the Aussie openers got off to an assured start in the opening session, the Indian bowling might have stood exposed. This is why Kumar’s spell in the first session of the Test was arguably the most significant of all factors in India’s triumph, with due respect to all the other magnificent showings. Had Australia seen off the new ball without much damage, they would have found it much easier facing the spinners. 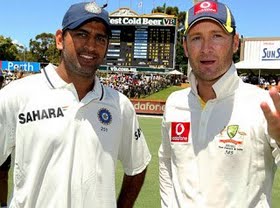 Once Kumar got those three crucial wickets in the opening session, India did exceedingly well to not let the advantage slip. Left-arm spinner Ravindra Jadeja was surprisingly effective in both the innings, and some his dismissals were classic stuff. The identical manner in which he cleaned up Moises Henriques and Michael Clarke in the first and second innings respectively –pitching the ball on middle and getting it to hit off – proved that on Indian conditions he is not just a run-stopping option for India. Thanks to the excellent bowling spells by Jadeja India did not feel the absence of Pragyan Ojha, which was the major worry with the present combination.

As for their batting performance, it was all about that one massive partnership that basically clinched the deal for India. What Cheteshwar Pujara and Murali Vijay did very well was not give wickets to Australian new ball during the first session of day two. Although only a little over 50 runs came in the session, the fact that India lost only one wicket was extremely crucial in the context of the game. That one session where the Aussie speedsters went all-out, but without any luck, wore out the visitors. It was a perfect exhibition of solid Test batting, the rewards of which Pujara and Vijay reaped for the next three sessions.

In spite of the massive win, a couple of problem areas for the hosts remain unchanged. Virender Sehwag continued to look out of sorts, and fell in unconvincing manner in both the innings. Also, Harbhajan Singh remained the least effective of the three spinners in the second Test also. It will be interesting to see what kind of action the selectors take when they meet to pick the squad for the next two Tests, especially since India are on a winning track right now.