MS Dhoni's love affair with silverware continued as he led the Chennai Super Kings (CSK) to successful defence of their IPL title with a comprehensive 58-run victory over the Royal Challengers Bangalore (RCB) in the final at the MA Chidambaram Stadium on Saturday.

MS Dhoni's love affair with silverware continued as he led the Chennai Super Kings (CSK) to successful defence of their IPL title with a comprehensive 58-run victory over the Royal Challengers Bangalore (RCB) in the final at the MA Chidambaram Stadium on Saturday.

A mammoth total of 205 was complemented by a three-wicket spell (3/16) from R Ashwin that paved way for Chennai's title defence, which began with a 159-run opening partnership between 'Man of the Match' Murali Vijay (95) and Michael Hussey (63). 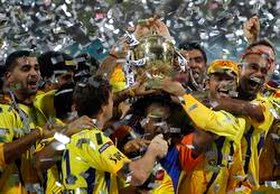 Chennai bowlers then restricted Bangalore to a paltry 147/8 and romped home by the big margin. It was an icing on the cake for CSK skipper Dhoni after the historic World Cup triumph last month.

Chasing 206 to win, Ashwin delivered a body blow to RCB's title aspirations when he got the big fish Chris Gayle for a naught in the first over. MS Dhoni's move to open the attack with the off-spinner struck more gold as he followed Gayle's wicket with Mayank Aggarwal's in his second over to put the CSK right on top.

Ashwin first induced an edge from Gayle, which was pouched by MS Dhoni, and then bowled Aggarwal (10).

Virat Kohli then instilled some hopes with a few lusty blows but AB de Villiers misread Shadab Jakati to be caught right in front. He became the third Bangalore wicket to fall inside seven overs as the scoreboard read 48/3.

Jakati then added another wicket to his tally when he lapped up a top edge from Luke Pomersbach to leave the RCB innings in complete disarray.

Another body blow was delivered by part-timer Suresh Raina when he put the final nail in RCB's coffin by taking out Kohli, who scored 35 off 32 balls before getting out lbw.

Regular fall of wickets sent half the RCB side back in the dug-out after 10 overs, making it the most lopsided of the four IPL finals so far. Shadab Jakati (2/21) bowled well in tandem with Ashwin to pick up his two wickets.

Earlier, Vijay and Hussey hit sparkling half centuries en route to a 159-run opening stand that laid the foundation for CSK's mammoth total of 205/5.

Hussey and Vijay gave Chennai a quick start and mixed caution with aggression after Dhoni decided to bat first. The duo didn't go on an all out attack and kept the scoreboard ticking with cheeky singles, while hitting a six each in the first four overs.

Another six from Vijay off Gayle brought up CSK's fifty in just 5.1 overs to stamp their early domination in the game as they picked 56 runs in the six overs of powerplay.

After the rollicking start, the openers didn't hold themselves back and intensified the assault, which saw the CSK hundred being raised in just 10.3 overs after Vijay's punishing 29-ball half century.

Vijay upped the ante from that point on, hitting fours and sixes almost at will. On the other end, experienced Hussey fed the strike to Vijay, picking an occasional boundary as he reached his fifty in 40 balls.

Wicket finally came for Bangalore when Hussey tried to loft Syed Mohammad over long-on for another six but ended up in the hands of Abhimanyu Mithun. That brought an end to a 159-run opening partnership in just 14.5 overs.

Dhoni (22 off 13) then lit up Chepauk with his two sixes but he and Vijay fell to S Aravind in consecutive deliveries.

RCB bowlers made some sort of a comeback towards the end by picking up two more wickets in the last two overs. It was Dwayne Bravo who hit six off the final delivery to help CSK cross 205.

For RCB, Aravind and Gayle picked two wickets apiece while Syed picked one.