Following his success in the ODIs and T20 in Sri Lanka, all-rounder Irfan Pathan – yes we can call him one – has stated that he keen to play the five-day version of the game again.

Following his success in the ODIs and T20 in Sri Lanka, all-rounder Irfan Pathan – yes we can call him one – has stated that he keen to play the five-day version of the game again. And while it will be too early to directly draft the left-arm seamer into the team, the selectors must keep an eye on Pathan’s performance in the upcoming limited overs contests, and should give him a chance to prove his Test credentials all over again. They shouldn’t brand him a limited overs specialist at least not as yet.

Too often in the past, the selectors have put players in a confused state of mind by not clearing stating as to what is expected from them. And so an Ajinkya Rahane sometimes finds himself in the ODI and T20 team and out of the Test team. On other occasions, Pragyan Ojha is picked for Tests, then dropped from the version and selected for ODIs. Similar has been the case with R P Singh and Munaf Patel, who have been in and out of the side rather consistently, and haven’t managed to impress much in any of the formats. 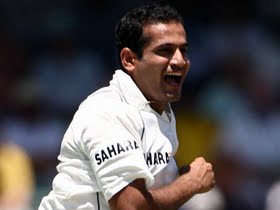 Agreed, the blame cannot be pinned on the players alone, for the names mentioned have disappointed on more occasions than one. Still, with a clearer selection policy in place, the players would definitely have had a better chance of succeeding. This is because the players would have been aware what is expected of them. The absence of Irfan’s brother Yusuf from the T20 squad is another example of baffling selection policy. He is the best T20 player we have in the country, yet he does not find a place in the Indian T20 team. As for Piyush Chawla, his selection seems to be based on the lottery system.

Incase you are wondering what all of this has got to do with Irfan, it is just a brief scenario of the dangers his future could face. As of now, he is only part of the shorter formats, but he could soon be drafted into Tests as well, depending on how well he performs in the future. The danger here is that Irfan’s chances of succeeding at the Test level have reduced significantly in recent years. Even since his pace has gone down, he has depended heavily on swing to succeed. This was evident in the series in Sri Lanka.

At his current speed, Irfan can at best keep the batsmen in check with some controlled bowling. However, when there is nothing on offer from the pitch, he is likely to be an easy target for the batsmen. In ODIs and T20s, Irfan can survive through variation, mainly by mixing up his pace. But Test cricket is a totally different ball game. Yes, Irfan should get another shot at renewing his Test career, but if he fails it should not be seen as a blot on his limited overs career, which is on the upswing.