Hosts Ireland went into the five-match series against Afghanistan as slight favourites having had the better international exposure of the two sides. But, while the first match was washed out due to rain,

Hosts Ireland went into the five-match series against Afghanistan as slight favourites having had the better international exposure of the two sides. But, while the first match was washed out due to rain, Afghanistan pulled off a surprise of sorts, overcoming Ireland by 39 runs in the second match at Belfast. Chasing 251, they would have backed themselves to win, but despite being in a comfortable position at one stage, ended up losing the game in rather disappointing fashion. Ireland will be keen to make amends, in Thursday's game, which also is likely to be affected by rain.

It was undoubtedly Ireland's batting that let them down. The experienced Ed Joyce batted well for his half-century, but there really wasn't much from the hosts' batsmen otherwise. A lot of them got starts, but did not carry on, as a result of which the pressure kept building on the batting side. William Porterfield and John Anderson got into their 20s while Kevin O'Brien made a quick 35, but that knock out punch was missing in their line-up. Better will be expected of the likes of Paul Stirling, and the abovementioned names as they look to square the series. 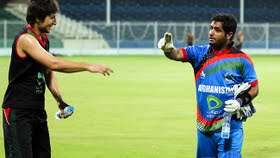 Although 250 is a gettable score in one-dayers these days, Ireland would still be slightly disappointed with some of their bowlers. Barry McCarthy and George Dockrell were slightly on the expensive side. And while Tim Murtagh and Peter Chase kept things tight, they managed only one wicket between themselves. Kevin O'Brien it was, who ended up being the best bowler on the day with four wickets.

In contrast, Afghanistan were a lot more consistent with bat and ball. They would have been disappointed not to have got a bigger score batting first, but Mohammad Shahzad again came to the party with 66 runs. Najibullah Zadran was the other one who impressed with 59 from 61. Javed Ahmadi and Samiullah Shenwari chipped in with 20s. Among the bowlers, Mohammad Nabi and Rashid Khan stood out with three wickets each, even as Dawlat Zadran and Mirwais Ashraf came up with good support acts, claiming two wickets each. Afghanistan will be keen to build on the gains while Ireland would be seeking revenge.