Following a second consecutive Test defeat at home against India, the Selectors have finally taken some strong decisions by making three changes in the squad for the Nagpur Test.

Following a second consecutive Test defeat at home against India, the Selectors have finally taken some strong decisions by making three changes in the squad for the Nagpur Test. The axe has fallen on comeback man Yuvraj Singh, ageing speedster Zaheer Khan and the recently ineffective off-spinner Harbhajan Singh. The Selectors have retained the struggling Sachin Tendulkar and also Skipper MS Dhoni who has exposed himself as a technically poor batsman at the Test level. The likes of Gambhir, Kohli, Ashwin and Ishant have escaped for now from being dropped. Umesh Yadav was not available for selection as he has been injured.

The Selectors led by Sandip Patel have brought in rookie fast bowler Parvinder Awana, who had impressed everyone with his pace and seam movement during the IPL for the Kings XI Punjab and now currently the leading wicket taker in the ongoing Ranji Trophy matches playing for Delhi. India has realized the importance of a leg spinner in its Test Side in home conditions and has brought in Piyush Chawla. Another player who has been selected is Ravindra Jadeja, who has literally forced his inclusion in the squad after hitting three triple centuries this season for Saurashtra. Jadeja has played quite a lot of ODIs and T20Is so far but couldn’t translate his IPL success at the international level. However, he has been consistently showing his prowess in the domestic longer format matches by playing marathon knocks in the last few years. Jadeja also adds his value in the side with his quick left-arm spin. 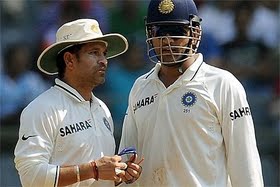 Meanwhile the future of Sachin Tendulkar and MS Dhoni in the team remains to be uncertain. Tendulkar hasn’t announced anything yet regarding his retirement but we could well see the BCCI give a farewell Test Match at Nagpur. Some kind of dramatic announcement is not to be ruled out in the next 2-3 days leading to the Final Test as one cannot see Tendulkar capable enough of handling top quality international bowling any longer. The case of Dhoni is also weak and he seems to have been retained in the team only because the Selectors didn’t want a change in the captaincy during the Series. Dhoni who said that he wasn’t going to quit from captaincy could find it difficult to make it in the next Indian Test Squad unless he does a miracle of sorts on his own in the Fourth and final Test at Nagpur.

The Selectors also announced the squad for the two T20Is against England to be played on the 20th and 22nd of this month. Uttar Pradesh’s medium pace all-rounder Bhuvneshwar Kumar has been called up in the Indian team for the first time. Kumar gets his chance in the place of the injured Irfan Pathan. Harbhajan Singh who was in the team during the T20I World Cup has been axed while seniors Sehwag and Zaheer had made themselves unavailable for the matches though the reasons for the same weren’t disclosed by the BCCI. Ravindra Jadeja and Parvinder Awana who got their first call ups to the Test team have been named in the T20I Squad as well.