The combined effort of ED Joyce and Kevin O’Brien give Ireland a six-wicket win against Afghanistan in the third ODI at Belfast, Ireland to square the five match series 1-1.

Earlier, Afghanistan won the toss and elected to bat first. Visitors didn’t start well and lost early wicket but Mohammad Shehzad played in his own counter attacking way. Though they kept losing wickets from one end, Shehzad continued to hit boundary and kept the scoreboard ticking. He added 76 runs for the fourth wicket with skipper Asghar Stanikzai who played a good hand for his 33 off 49 deliveries. Then Ireland struck twice to break the visitors scoring. Both Shehzad and Stanikzai was dismissed within three deliveries. Shehzad scored 81 off 95 balls with the help of 10 boundaries. O’Brien lead the Ireland’s attack with his 3 for 28 in his 9.1 overs to bowl out Afghanistan for 236 runs. O’Brien again came handy for Ireland with the bat too. His contribution of 75 with the bat where he put 144 runs for the fourth wicket with ED Joyce helped the host cruise to target with 15 balls to spare. Joyce scored his fourth ODI century and remained unbeaten on 105. 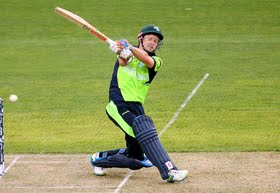 Though Ireland reached the target comfortably in the end but the chase was not so smooth. Hamid Hassan struck twice to reduce the host to 29 for 3. Ireland captain William Porterfield edged to first slip for 1 in the second over, before Sean Terry was trapped lbw for 3 by one that came back in. Joyce and O’Brien steered the Ireland’s ship to safety by batting together for 28.5 overs. O’Brien was dismissed in 38th over after his 85-balls 75-runs and at that time Ireland still required 64 runs off 77 balls. But the breakthrough didn’t affect the chase and Ireland cruised towards victory. Paul Striling played a fine cameo of 39 runs off 37 balls to add significant 64 runs for the fifth wicket with Joyce. Joyce completed his century in 48th over and hit winning run two balls later.

The fourth ODI of the series will be played on 17th of July at Belfast.