After a high-scoring one-day series, India and England will now battle it out in the T20s, with the first T20 to be played at Republic Day at Green Park in Kanpur. India won the series 2-1, mainly on the strength of their batting.

After a high-scoring one-day series, India and England will now battle it out in the T20s, with the first T20 to be played at Republic Day at Green Park in Kanpur. India won the series 2-1, mainly on the strength of their batting. They will look to continue in the same vein in the T20s as well. But, England will be no pushovers. Their confidence would be on a high after the triumph at Eden Gardens in Kolkata on Sunday, where their batsmen outshone India's. It has been a series for batters so far with 300 plus being scored in all six innings of the ODIs. No doubt, the bowlers will be under pressure as they head into the T20s.

India have rested both Ravichandran Ashwin as well as Ravindra Jadeja, their two main bowlers, from the T20 series. In their place, experienced leggie Amit Mishra and Parvez Rasool have been brought in. As such, the Indian bowling will wear a different look at Kanpur. In spite of a disappointing ODI series, Jasprit Bumrah should be persisted with. Old warhorse Ashish Nehra continues to find a place in the team. He should be in the starting eleven. With Hardik Pandya slotting in nicely as an all-rounder, it would be interesting to see what India does with Bhuvneshwar Kumar. Even in the spin department, they have the additional option of Yuzvendra Chahal. 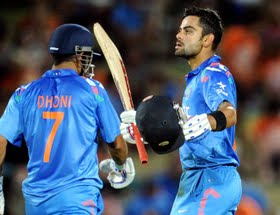 As for England, in the preview to the Kanpur ODI, a lot of attention has been focused on Tymal Mills. The man apparently can bowling real fast and England are banking on him to trouble the Indian batsmen. He replaces Chris Woakes, who opened the bowling in the T20 format. Chris Jordan, who sat out of the ODIs, is also likely to get a game. Like in the one-dayers, Jake Ball, Liam Plunkett and David Willey are the other pace options. England's batting pretty much remains the same with in-form Jason Roy, followed by Joe Root, skipper Eoin Morgan, wicket-keepers Jos Buttler and Jonny Bairstow and the ever-improving all-rounder Ben Stokes.