Rohit becomes the second Indian after Sourav Ganguly to score a WC hundred in a knockout game. That is an unbelievable stat. I cannot fathom the fact that only one Indian has scored a hundred before today. And India have won two World Cups! Ganguly got his hundred against Kenya in the 2003 WC semi-final. The likes of Sachin, Azhar, Dravid, Sehwag and Co. haven't got a hundred in a knockout game.
Rohit Sharma 137 (126b 14x4 3x6)
Series Records Most RunsCenturiesFiftiesFoursSixesWicketsCatches 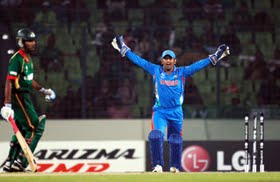 The pitch for the quarter-final is the same one that was used in the Bangladesh-Sri Lanka Group A game. It's expected to be flat and full of runs. However, teams would keep an eye on the weather as some showers are forecast for Thursday afternoon and evening.

Bangladesh are playing their first knockout match in a top-flight ICC tournament. India, on the other hand, are playing their 10th under MS Dhoni's captaincy. Dhoni, with eight wins from nine matches (Champions Trophy, World T20 and World Cup) is level with Ricky Ponting, whose eight wins have come from 11 games.

Bangladesh batsman Mahmudullah has scored 344 runs from five games in this World Cup, more than anyone from India. Five of Bangladesh's top 10 aggregates for batsmen in a World Cup have come in this tournament.

None of the India batsmen in this squad have scored a century in ICC tournament knockout game.