Steve Smith scored a well compiled century to help Australia reach 481 in their first inning of the fifth Ashes Test at Oval and in reply England suffered a batting collapsed. They have already lost eight wickets for just 107 runs on the board at the end of the day 2 play.

Steve Smith scored a well compiled century to help Australia reach 481 in their first inning of the fifth Ashes Test at Oval and in reply England suffered a batting collapsed. They have already lost eight wickets for just 107 runs on the board at the end of the day 2 play. Each mactch in this series in has been one-sider. Teams are not ready to fight back when opposition has displayed a good show.

Australia scored 481 in their first innings, batting for just under five sessions. The visitors did extremely well to negotiate the cloud cover and the short-lived assistance offered to the English seamers by the pitch on Day 1, before making the best of glorious conditions for batting in the second half of their innings. The pitch at Oval is just like as that of the Lord’s where Australia defeated England by 405 runs. Smith scored his 11 Test century and sharped crucial partnership with Adam Voges (76) and Mitchell Starc (58). Yes, condition were in favour of the batsmen but you cannot take credit from the batsmen for the guts and brilliance they have shown. 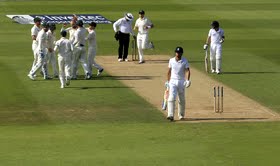 The duo of Smith and Voges had batted so well together, notching 146 runs for the fourth wicket and given Australia the advantage. Now, within two deliveries, they had almost thrown it away. It wasn’t entirely a chanceless innings from Smith. On 92, after playing so watchfully for over two sessions, Smith swiped at a short and widedelivery from Steven Finn and found the edge that carried to the keeper. It happened just past noon and a delivery after his overnight partner, Voges, had been dismissed leg-before. And then, a huge chorus of disappointed cries went around the Oval, as the big screen pointed out that Finn had overstepped by a mile. The umpires, not for the first times in this series – and as it would turn out, not for the last time in this match – had missed a huge no-ball.

When England walked out to bat then everyone thought that we will see buckets of run in this match. But they seemed not to be intrested in batting at all. One after the other, the Englishmen gave their wickets away and induced a loud, sarcastic cheer from the partisan crowd when they crossed 100 with eight wickets down.England is still trailing by 374 runs and the follow-on is on the cards. They will have to rethink their strategy and sort out why their batter are giving away their wicket on beautiful batting pitches. On the other hand, follow-on is just a formality now and Australia will have to think whether they will enforce follow on or not.