As South Africa prepare to take in India in the four-Test series to begin soon, we look back at the previous tours of the Proteas to India. We begin with their first-full tour, in 1996-97

As South Africa prepare to take in India in the four-Test series to begin soon, we look back at the previous tours of the Proteas to India. We begin with their first-full tour, in 1996-97.

1st Test at Ahmedabad (November 20-23, 1996): India, under Sachin Tendulkar, won the toss in this match, and decided to bat first. The Test also marked the debut of VVS Laxman, who would go on to become one of Indian cricket’s greats. India crumbled to 223 in their first innings – Tendulkar top-scoring with 42, Mohammad Azharuddin making 35 and Sanjay Manjrekar 34. For South Africa, Allan Donald claimed 4 for 37 while Fanie de Villiers and Pat Symcox picked up two wickets each.

India fought back well with the ball, left-arm spinner Sunil Joshi claiming four wickets as the hosts dismissed the visitors for 244. The spinners Anil Kumble, Joshi and Narendra Hirwani ran through the Proteas top and middle order to have them in strife at 119 for 7. However, de Villiers hit an unbeaten 67 and Symcox made 32 as South Africa recovered to take a slender lead. India were rolled over for 190 in their second innings, debutant Laxman top-scoring with 51. South Africa were favourites to win the game, but on a crumbling pitch, Javagal Srinath bowled his heart out, and his 6 for 21, led India to a memorable 64-run triumph. 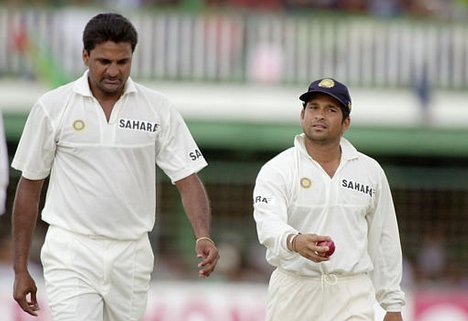 2nd Test at Eden Gardens (November 27-December 1, 1996): South Africa won the toss and batted first in the game which saw the debuts of Herschelle Gibbs and Lance Klusener. South Africa were off to a sensational start, as both the opener Andrew Hudson and Gary Kirsten hit centuries. The opening pair added 236 for the first wicket. Venkatesh Prasad claimed six wickets for India, but South Africa still finished with a healthy 428. India’s top and middle order crumbled, and Mohammad Azharuddin had to return after being retired hurt to rescue India. He smashed 109 from only 77 balls, and Anil Kumble contributed 88 as India finished on 329.

South Africa toyed with the Indian bowling in the second innings. Kirsten scored his second hundred in the game, before being run out for 133. Daryll Cullinan charged his way to an unbeaten 153 as India were set an improbable 467 to win. They fell way short as Klusener had a sensational debut, claiming 8 for 64.

3rd Test at Kanpur (December 8-12, 1996): India won the toss, and decided to bat. WV Raman and Tendulkar made fifties, but Adams’ six-for kept India down to 237. Kumble and Srinath then combined to claim seven wickets as South Africa crumbled to 177. Kirsten’s 43 was the top score on a crumbling pitch.

In the second innings, Azharuddin gave a wonderful exhibition of batting on a tough surface. At ease against both spin and pace, he made a scintillating 163 not out, as India made 400 and set South Africa 461 for victory. The Proteas caved in under pressure with skipper Hansie Cronje’s 50 being the top score. Srinath and Joshi claimed three wickets for India, and Prasad two. Azhar was man of the match, and man of the series as well.