Sachin, India in control after bowling out Windies cheaply

The crowd at Wankhede was in for a big disappointment in the morning when MS Dhoni had won the toss and opted to bowl first as the expectation was that Tendulkar wouldn’t get to bat on Day 1.

The crowd at Wankhede was in for a big disappointment in the morning when MS Dhoni had won the toss and opted to bowl first as the expectation was that Tendulkar wouldn’t get to bat on Day 1. However, thanks to the spectacular collapse from West Indies in the post lunch session, Sachin Tendulkar did get to bat on the first day itself and did so in style. The good news for his fans is that he would be resuming on a solid 38 not out on Day 2 with India in control at 157 for 2 with a deficit of just another 25 runs.

India had a breezy opening stand from Murali Vijay and Shikhar Dhawan as the pair eased into the West Indian bowling attack. Just when things started to look too easy for the pair, Shikhar Dhawan threw his wicket away with a high risk shot off Shane Shillingford. Dhawan dared to play the slog sweep against the turn and across the line from outside off, and paid the price by top edging it to deep backward squareleg. The left-hander was going well until then with his 33 from 28 balls with 7 fours. The hosts had got to a wonderful start of 77 for 1 in just 13.2 overs. 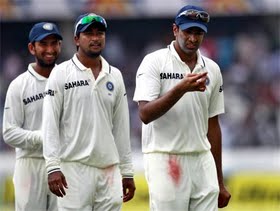 Two balls after Dhawan’s exit, Murali Vijay got out caught bat pad tamely to a jumping off break from Shillingford. Vijay was well set on 43 from 55 balls with 8 fours when he got out leaving India at 77 for 2. Ironically, the loss of two wickets only made the crowd happy as it paved way for Sachin Tendulkar with the bat in the middle. The great man walked in after getting the Guard of Honour from the fielding side and the Umpires and amidst chants of Sachin Sachin…settled in quite nicely. Tendulkar moved his feet well, easily read the doosras off Shillingford and stroked the ball sweetly to score 38* by close in 73 balls with 6 fours. Giving him company was Cheteshwar Pujara, who scored a positive 34* from 49 balls with 4 fours.

Update at Tea on Day 2: Something strange happened in the 40-minute lunch break at the Wankhede Stadium that West Indies resuming the afternoon session at 93 for 2 collapsed dramatically to 182 all out! The tourists showed dismal batting performance to lose 8 wickets in just 27.2 overs adding only 89 runs in the second session. Pragyan Ojha took five wickets and Ashwin chipped in with three as West Indies went down in a hurry without putting up any fight.

There was a quick wicket after lunch with Pragyan Ojha having opener Kieran Powell (48 from 80 balls) caught bat pad at shortleg in a flick shot. About 10 overs later, Ojha struck again but it was possible only because Marlon Samuels (19 from 59 balls) poked at a turning ball outside off to get caught behind. Three overs later, Bhuvneshwar Kumar produced a superb delivery that forced Shivnarine Chanderpaul (25) to nick him on the backfoot to slips where Ashwin held onto a sharp low catch. Chanderpaul, playing in his 150th Test, threatened to come out with all guns blazing when he hit his second ball for a six off Ojha but Bhuvneshwar Kumar had something special in store to dismiss him.

West Indies lost half their side with just 148 on the board. The lower half of their batting doesn’t have any reputation. Narsingh Deonarine, the last recognized batsman was brilliantly caught one-handed by the diving Vijay at slip off Ashwin after a 24-ball 21. Skipper Darren Sammy thought he would hit his way out of trouble but could only miscue his slog sweep off the second ball he faced to gift R Ashwin his 100th Test scalp. Pragyan Ojha wrapped up the innings taking the remaining three wickets to collect his 6th fifer in Tests. Shillngford was lbw attempting to sweep a full length arm ball, Tino Best caught behind, under edging a slog sweep and last man Shanon Gabriel was caught behind edging a forward defence to a turning ball.

West Indies folded in just 55.2 overs with Pragyan Ojha taking 5 for 40. Ashwin took three wickets and there was a wicket each for Shami and Bhuvneshwar.

Update at Lunch on Day 1: West Indies looked very shaky in the morning session on a pitch that was conducive for the seamers and spinners. However, India could only take two wickets in the 28 overs of action but that was of Chris Gayle and Darren Bravo. The visitors are 93 for 2 at lunch at the Wankhede Stadium with opener Kieran Powell on 45* (from 72 balls) with an indecisive Marlon Samuels on 0* (from 16 balls at the crease).

West Indies lost Chris Gayle (11) cheaply in the 6th over when the left-hander tamely fended off a short ball from Mohammed Shami to gully. India had to work hard for its next wicket as the luck was going with the tourists, add to that a drop catch from Ashwin and atleast three close lbw calls going down. But alas, India got its second wicket, 15 minutes prior to lunch when Ashwin got his off break to turn just enough around middle to force a dangerous looking Darren Bravo (29 from 63 balls) to edge him behind. The second wicket pair for Windies added 61 runs.

Toss and Teams: India have won the toss and Dhoni says that the fans will be disappointed as the hosts are going to bowl first. So they will have to wait for tomorrow perhaps to see Sachin Tendulkar’s batting. As expected India go in with the same team while West Indies have made two changes with Narsingh Deonarine and Shannon Gabriel replacing Veerasammy Permaul and Sheldon Cottrell respectively.

This Test match will be the 200th and also the last of his career for Sachin Tendulkar. And for Shivnarine Chanderpaul, it will be the 150th Test of his long career.

The pitch at the Wankhede Stadium is going to be a sporting wicket with assistance to the seamers in the morning and spinners will come into play as the match progresses. There is enough grass on the track along with moisture to excite the pace bowlers.