Cricket Australia today announced a 12-man squad to face World No.1 Team South Africa in the opening Test Match at Gabba next Friday.

Cricket Australia today announced a 12-man squad to face World No.1 Team South Africa in the opening Test Match at Gabba next Friday. Wicket Keeper Matthew Wade has managed to retain his place and so does opening batsman Ed Cowan. The Selectors have put Wade on the toes by stating that they still have Brad Haddin in their mind as Australia’s Wicket Keeper.

The Aussies have included left-arm quick Mitchell Starc while ignoring Pat Cummins, who is yet to play a first-class game in recent times. Veteran Ricky Ponting also finds a place in the side for what could be his last Test Series. 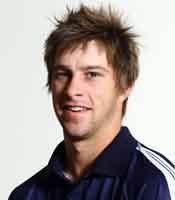 The Aussie bowling attack comprises of four pacers in Peter Siddle, Ben Hilfenhaus, James Pattinson and Mitchell Starc along with off-spinner Nathan Lyon. Australia host South Africa in a 3-Test Series with the first Test to be played at Brisbane from the 9th of next month.

National Selector John Inverarity according to the Cricket Australia website has been quoted to have said: “The 12 man squad for the first Vodafone Test against South Africa is as many have predicted.

“Most discussion centred on the wicket-keeping role with both Matthew Wade and Brad Haddin presenting a strong and compelling case for inclusion.

“Matthew came into the Australian ODI team in February and has since acquitted himself especially well.

“Matthew and Brad both went to the West Indies; Matthew as our preferred ODI and T20 player and Brad as our incumbent and preferred Test match ‘keeper. As is widely known Brad returned to Australia early in the tour due to family circumstances and as a consequence Matthew was our Test ‘keeper for the three Test matches.

“He kept and batted very well and made a match-defining brilliant century in the second innings of the Third and final Test against West Indies.

“Since then he has played and gained valuable experience in England, the UAE and Sri Lanka. As a young player, getting better by the month, he is thoroughly deserving of his retention.

“While Matthew has been retained as the Test ‘keeper, Brad remains a player of significant interest.

“The last Test match that Australia played, the Third Test in the West Indies last April, included Ryan Harris. Ryan is continuing his rehabilitation from injury and is unavailable.

“Peter Siddle and James Pattinson have recovered especially well from the injuries that rendered them unavailable for that last Test in West Indies. In fact, they have been enjoying an ideal preparation for the first Vodafone Test in Brisbane having played in three Bupa Sheffield Shield games with another one to come later this week.

“The squad will assemble in Brisbane on Monday and will have three days of intensive preparation together to be ready for the beginning of this long awaited series starting on 9 November,” Inverarity said.