After sharing honours with Australia on Saturday, India raced ahead of the visitors on day four at Ranchi, thus leaving the Aussies precariously placed. Cheteshwar Pujara carried on the great work

After sharing honours with Australia on Saturday, India raced ahead of the visitors on day four at Ranchi, thus leaving the Aussies precariously placed. Cheteshwar Pujara carried on the great work to notch up his third Test double century.

Pujara was not the lone ranger in India's renaissance. If Murali Vijay provided him able support on Day three, wicket-keeper bat Wriddhiman Saha rose to the occasion on Sunday, with a well-compiled hundred. Pujara and Saha 199 runs for the seventh wicket which all but put paid to Australia's chances of seizing a win. On the contrary, they are now in serious danger of losing the Test, having crumbled to 23 for 2. 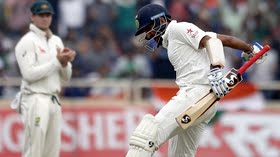 Earlier, Pujara and Saha brilliance enabled India to take a sizeable lead of 152, after began the day 91 runs adrift, with four wickets in hand. So well did India bat on Sunday, they were able to declare the innings at 603/9, with Ravindra Jadeja coming in and blasting an unbeaten 54 off 55 balls.

An even more crucial contribution from him was to come with the ball though as he claimed the struggling David Warner and night watchman Nathan Lyon to leave Australia with an arduous task of saving the Test on the final day. Jadeja used the rough to perfect effect to bamboozle Warner after he had slammed Ravichandran Ashwin for three fours. He then got through the defence of nightwatchman Lyon, who played down the wrong line.

The late wickets capped a miserable day for Australia, as Pujara created a new record for facing the most number of balls by an Indian batsman in an innings. Australia were wicketless in the first two sessions of the day despite Pat Cummins and Josh Hazlewood bowling their hearts out.

Pujara was given out leg-before off Lyon in the 155th over. Pujara reviewed successfully as replays showed ball was missing leg. Saha had luck too. He was given out leg before in the second over of the day, but the ball just missed leg as the decision was reviewed. This was an indication of how poor a day it was going to be for the Aussies. Pujara and Saha showed no mercy until they fell after tea, looking for quick runs.