Toss: Punjab have won the toss and elected to field first 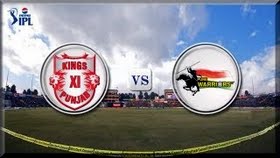 They's chased 185 with seven wickets to spare, from 5 for 2. Got tight in the final over, but Mandeep and Miller deserved this one.

Miller is Man of the Match. Miller: "Mandy unbelievable knock, going right through the innings. We tried to play each ball on its merit. We tried to give ourselves a chance in the end. It probably is [the best I have batted in a T20 game]."

Gilchrist: "Difficult decision at the toss, looked like a beautiful wicket. Great chase, you are dealing with small boundaries on one side and big on the other, you are trying to balance it out. Vohra played an important little innings there."

Finch: "Brilliant from Miller and Mandeep. We had a pretty competitive total, just one of those games where it is a couple of inches here and there. Took a gamble bowling Dinda in the 19th over to try and seal it there but you have guys who can hit it out any time."

In the five matches between the two teams, Warriors have won three times, while Kings XI have won twice.

David Hussey is joint-second in the list of batsmen to score most ducks in Twenty20 cricket. Hussey has 14 ducks from 195 innings, behind Herschelle Gibbs (23 from 161).