India have been exemplary in all departments so far

Consistency hasn’t been Team India’s forte over the years, but in the ongoing Champions Trophy they have definitely shown signs of improvement.

Consistency hasn’t been Team India’s forte over the years, but in the ongoing Champions Trophy they have definitely shown signs of improvement. India have been on top of their game right from the time the warm-up matches began and, unlike in previous years, they haven’t relented an inch. The convincing victory over arch-rivals Pakistan on Saturday at Birmingham was only the latest instance of their domination in the tournament so far. Their all-round performance should augur well as they head into the semi-finals, where they would obviously have to remain at their best if they want to progress further.

As expected, batting has been their stronger suit in the event so far, but they would be pleased that their bowling has also stood up in the last two matches. Shikhar Dhawan, who came into the tournament on the back of a sensational Test debut against Australia at Mohali, has continued to prosper. To his credit, he is making the most of his smashing form. With two hundreds and a 48 in three matches, he has been the mainstay of the Indian batting line-up. Dhawan’s success is also a firm reminder to the selectors that they should try out youngsters without having any qualms in case seniors are not performing. 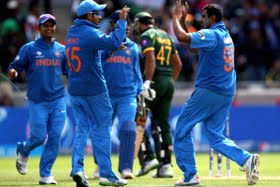 The success of Rohit Sharma at the top of the order is another big plus for the Indians. The Mumbai batsman looked out of sorts in the practice matches, and yet India took the risk of opening with him ahead of regular opener Murali Vijay. Thankfully for India, Sharma has lived up to the faith shown in him. The good starts he has given India in the company of Dhawan have in instrumental in the team’s success in the series. Having said that, India would be even better served if Sharma can convert his 50s into 100s.

There were a few worries for India on the bowling front after they were taken apart by South Africa. But, against weaker sides like West Indies and Pakistan they looked a lot more threatening. Ravindra Jadeja was superb against West Indies, and chipped in with crucial scalps in the match against Pakistan as well. Bhuvneshwar Kumar also bowled a wonderful spell against Pakistan at the start of the game, which swung the match in India’s favour. Among the others Ishant Sharma and Umesh Yadav have been among the wickets, but they have been on the expensive side, an aspect they need to work on.

Fielding has been one area where India have been magnificent in the tournament. The likes of Jadeja and Suresh Raina have pulled off some stunning stops, which has made a significant difference to the team’s fortune. The one area of concern as they head into the semi-finals is that their middle and lower order hasn’t got a decent hit yet. With Dhawan, Sharma and Karthik doing the bulk of the scoring at the top of the order, the rest haven’t had to do much. India would be hoping that the likes of Raina and Dhoni stand up and deliver if the need arises in the semis.