India must get their act together

This Indian team isn’t anywhere close to the one that won the inaugural T20 World Cup in 2007. On the contrary, it is a side struggling to make an impact.

This Indian team isn’t anywhere close to the one that won the inaugural T20 World Cup in 2007. On the contrary, it is a side struggling to make an impact. Even in the opening game against Afghanistan, they weren’t particularly impressive, but somehow managed to scrape through. When they take on England at Colombo though, they somehow need to be at their best. Their opponents would fancy their chances considering recent success’ they have tasted against India in all forms of the game. Then again, the conditions will be more suited to India, which will put the game on an even keel. 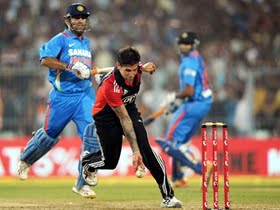 India’s worries haven’t changed from what they were before the start of the tournament. Virender Sehwag and Gautam Gambhir have continued their seemingly unending troubles with the bat. Against Afghanistan, it did not hurt them, but bigger teams will exploit this weakness of theirs for sure. It’s about time the Delhi duo comes to the party. The form of India’s lead bowler is another significant worry. Zaheer Khan was taken apart by the unheralded Afghan batsmen, and that would only encourage England as they go in to battle with India.

Interestingly, skipper M S Dhoni has stated that his side might make some alterations for this game. We wonder if they would try out five bowlers by keeping out Rohit Sharma or bring in Harbhajan Singh by benching one of the quicks? This will be India’s last chance to figure out what works well for them, and so even though they would like to end up on the winning side, it is equally important that they be sure of their best team combination.

Following a four-over struggle against the spirited Afghanistan bowlers, England batted and bowled like true champions in the match. Unlike India, they asserted their superiority and dominated the floundering minnows. Luke Wright’s attacking knock at the top of the order means that England can now stop thinking about Kevin Pietersen, at least until and unless they begin to falter in the batting department. Although Craig Kieswetter failed in the opening game, he now has the experience to do well in big matches, and should be confident of the same. Alex Hales has shown enough in the few games he has played for England to prove that he is one to watch out for.

The middle-order batting looks strong as ever with Eoin Morgan providing the innovative stuff and Jonny Bairstow and Jos Buttler emerging as confident big hitters. As for skipper Stuart Broad, he has come a long way since the sitting duck, who has thrashed for six sixes in an over by Yuvraj at Durban back in 2007. He is not only the team’s premier all-rounder now, but also a confident leader. Secretly, he would still want to get the better of Yuvraj in this game.

On current form, England hold the upper hand. As for India, they can win only if they get their act together.