Mumbai Indians got bowled out for 108 chasing 141 against KKR. Sunil Narine picked up four wickets while Balaji and Kallis took two wickets each.

Hosts Mumbai Indians crashed to a 32-run defeat against Kolkata Knight Riders despite chasing a modest target of 141. It was pure magic from West Indian Sunil Narine that caught the Mumbai Indians’ batsmen in a web. Jacques Kallis and Lakshmipathy Balaji bowled tremendously too as Mumbai Indians collapsed to 108 all out in 19.1 overs at the Wankhede Stadium!

After a quiet start, Herschelle Gibbs (13 from 24 balls) departed in the 6th over at 26 for 1 when he was out lbw trying to sweep an arm ball from Iqbal Abdulla. Gibbs’ opening partner Sachin Tendulkar who took 24 balls for his 27 was completely bamboozled by a quicker turning off break from Sunil Narine which hit his pad and forced its way onto middle in the 11th over with Mumbai Indians at 60 for 2.

Although Mumbai Indians had good resources in the dug out to come, the asking rate was getting too high because of the slow start. One after the other, the Mumbai Indians’ batsmen got out under the pressure of scoring quickly. In the 17th over, Jacques Kallis provided the death blow when he had the dangerous Kieron Pollard (top edging a pull to the keeper) and Dwayne Smith (lbw to a skiddy inducker) dismissed in consecutive deliveries.

The last hope for Mumbai Indians was Rohit Sharma but he got out too in the 18th over to Sunil Narine without doing any damage. Very soon, the Mumbai Indians got bowled out for a paltry 108 with Sunil Narine claiming 4 for 15 in 3.1 overs to bag the purple cap. Narine was well supported by L Balaji with 2 for 11 in 4 overs and Jacques Kallis with 2 for 32. The left arm spinners Shakib Al Hasan and Iqbal Abdulla chipped in with a wicket each as well.

This victory keeps KKR in the second spot with 19 points while Mumbai Indians are at third with a point lesser than the former. Both the teams have one more game left and it will be very important for Mumbai Indians to win that. KKR have joined the Delhi Daredevils in the play offs. 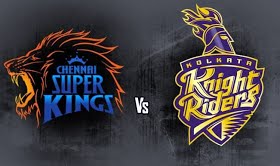 Apr 21, 2021: Brimming with confidence after a couple of impressive wins, Chennai Super Kings (CSK) will face a struggling Kolkata Knight Riders (KKR) in the 15th match of IPL 2021 at the Wankhede Stadium in Mumbai tonight.