South Africa moved to 136 for 2 in the 42 overs that were bowled on a rain-affected opening day’s play in the Third and Final Test at the Basin Reserve in Wellington. Hashim Amla, the no.3 top scored for the visitors with 63 (from 98 balls with 10 fours). Opener Alviro Petersen is batting on 44 (from 113 balls with 3 fours and a six) along with JP Duminy, who is on 23* (from 28 balls with 2 fours). 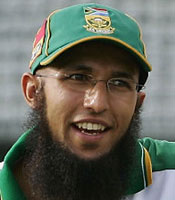 The Proteas asked to bat first after losing the toss lost their Skipper Graeme Smith cheaply in the 6th over before Amla steadied the ship with Peteresen in a 93-run stand. The wicket takers for the Kiwis were Doug Bracewell and Mark Gillespie.

The visitors lost Jacques Kallis in this match because of a stiff neck. The all-rounder was replaced with JP Duminy. For the Kiwis, Daniel Flynn and Dean Brownlie came in the places of Rob Nicol and Brent Arnel. The Proteas lead the 3-Test Series 1-0.