It’s about winning, not about stats: Virat Kohli

Virat Kohli played a captain’s knock as India beat West Indies by eight wickets to clinch the series 3-1 at Sabina Park in Kingston, Jamaica. Kohli made an unbeaten 111, and Dinesh Karthik scored exactly 50 not out, as India won the series with ease.

Post the match, Kohli expressed satisfaction in the manner of victory, and also praised his teammates for their contribution. “First and foremost the aim was to win the series, have a complete team performance,” Kohli said. 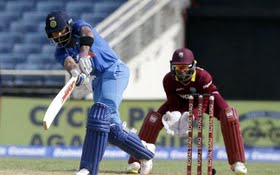 “Again Ajinkya was very good, Dinesh too. People are grabbing their opportunities - Shami playing one-day cricket after two years,” he went on to add.

“Winning convincingly in a chase is always nice. For me it’s all about getting the team across the line. It’s not about stats - it’s about looking at the scoreboard, looking at the bowlers, which ones to target, which ones to give respect to. I like taking control of the situation, stringing partnerships,” Kohli concluded saying.

India now take on West Indies in a one-off T20 on Sunday.