Prior to the beginning of the India-Sri Lanka one-day series many critics, including this writer, questioned the selection of left-arm seamer Irfan Pathan as a replacement for the injured R. Vinay Kumar, ahead of Praveen Kumar.

Prior to the beginning of the India-Sri Lanka one-day series many critics, including this writer, questioned the selection of left-arm seamer Irfan Pathan as a replacement for the injured R. Vinay Kumar, ahead of Praveen Kumar. Well, Pathan has proved all of us wrong with some excellent performances with both bat and ball during this series. To be honest there wasn’t any malice involved in questioning Pathan’s selection, for he is a wonderfully hardworking cricketer. It was just that he wasn’t able to perform anywhere near his potential, and his bowling had also lost the sting he once possessed.

No, he hasn’t regained everything on this Lankan tour. But what he has done is exhibit that he can be a match-winner on his day. Unlike the Pathan of old, this new-age Pathan needs a semblance of luck on his side to succeed. Since he no longer bowls with the same zing, it is easy to take Pathan apart in conditions where the ball is not doing much. Upul Tharanga demonstrated that early in the chase on Saturday. He smashed boundaries at will against the left-arm seamer. What Pathan did well in the series against Sri Lanka though was maintain a good line and length, sticking to it despite the batsmen going after him. 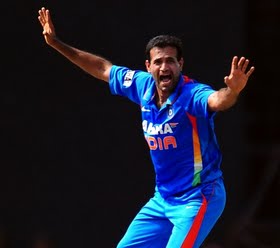 Pathan has realised his limitations, and is bowling according to them. His patience was suitably rewarded, especially in the final ODI. Coming back to the luck factor, the scalps of Tharanga and Thisara Perera, late in the innings, were not rewards for bowling good deliveries, but poor shots played by the batsmen. The credit for Pathan should go to an extent because he maintained a tight line. However, it is a fact that with his pace, it will be difficult for Pathan to get the batsmen out with wicket-taking deliveries. All he can do is keep the ball in the right areas, and hope the batsman commits a mistake. And if it’s his day, like it was on Saturday, he could end up playing the role of a match-winner.

Bowling apart, Pathan has impressed with the bat as well. In two games, under varying circumstances, the left-hander has played mature knocks, both of which have helped India into winning positions. In the first instance, India were under trouble chasing when Pathan joined hands with Suresh Raina, and calmly saw India home in a close game. Again, in Saturday’s encounter, India were in danger of being bowled out inside 50 overs, batting first. However, Pathan, in the company of M S Dhoni, helped India extend their innings into the 50th over, as a result of which they finished with a healthy total.

Despite his success in Lanka, it cannot be said that the Pathan of old his back. He never will for the left-arm seamer has now become a one-day bowling all-rounder, just like Ajit Agarkar before him. His Test prospects are slim. Still, something of Pathan is better than nothing of him for Indian cricket.