Kiwis’ resilience came to the fore at Colombo

Even the Englishmen shocked India with their spinners at the Wankhede Stadium in Mumbai, in a neighbouring country a spirited New Zealand got the better of an underperforming Sri Lankans at the P Sara Oval in Colombo.

Even the Englishmen shocked India with their spinners at the Wankhede Stadium in Mumbai, in a neighbouring country a spirited New Zealand got the better of an underperforming Sri Lankans at the P Sara Oval in Colombo. New Zealand, rarely win Tests on the sub-continent; their last in Sri Lanka in fact came way back in 1998, also in Colombo, but that time at the Premadasa Stadium. While the win itself was a big achievement for the under-talented New Zealand squad, the comprehensive manner in which they achieved the same was absorbing.

The extremely talented Kane Williamson, who has had a mixed Test career thus far came up with one of his best performances in international cricket till date in the first innings of the Test. The fact that he looked at equal ease against both spin and pace was the most soothing aspect of his knock. That Williamson came up with the performance after his side found itself in trouble very early on was equally striking. It proved that the number three batsmen also possessed the other desired attribute to succeed in Test cricket, patience. He showed guts in plenty hanging around for 421 minutes during his wonderful knock. 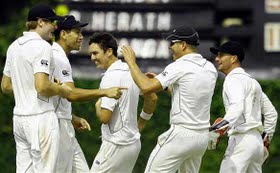 The Colombo Test also brought to the fore what New Zealand’s captain Ross Taylor is capable of. There has never been any doubt about Taylor’s immense talent. For some reason or the other though he always hasn’t been able to transform his talent into potential. The Colombo Test was a definite exception. Combining with Williamson, Taylor build a solid foundation for New Zealand in the Test, which paved the way for the team’s first win in Sri Lanka for 14 years. Taylor has rarely looked uncomfortable while batting out in the middle, but the difference at Sri Lanka’s ‘Oval’ was that he carried on to play a hugely significant hand.

If the batsmen did their job in the Test, the performance of their fast bowlers was equally crucial. Like he did so well in India, Tim Southee moved the ball and troubled most Sri Lankan batsmen. More importantly, he did not stop at just being penetrative, but nipped out big names like Dilshan, Sangakkara and Mathews in the first innings. It was his awesome five-for adorned effort that gave the Kiwis a significant first innings lead, which proved to be the difference between the two sides at the end of the game. Following his successes in India and Sri Lanka, Southee is definitely on his way up as a bowler.

Even as Southee played a significant part in New Zealand’s resurrection, he got excellent support from Trent Boult. Southee’s opening partner was equally incisive as a result of which there was no breather for the Sri Lankan batsmen. Like Southee, he too picked up big scalps like Jayawardene, Samaraweera and Mathews over the course of the Test. As for New Zealand, the win was very similar to the way they bounced back against Australia at Hobart. They would hope for similar performances in the future as well.