IPL 2016: Mumbai's batting prowess again made the difference against KKR

Kolkata Knight Riders have lost only two matches in the IPL 9 season so far, and both the defeats have come against Mumbai Indians, the latest one being at the Wankhede stadium on Thursday.

Kolkata Knight Riders have lost only two matches in the IPL 9 season so far, and both the defeats have come against Mumbai Indians, the latest one being at the Wankhede stadium on Thursday. It wasn't a perfect effort by the hosts as Kolkata put up a challenging score on the board batting first. Also, Mumbai did not help their own cause by putting down a number of chances, and also missing a run-out. At the end of the day though Mumbai's batting prowess was too much for Kolkata, as they muscled towards the target, very much like how they had done in the first encounter between the two teams earlier in the season.

Chasing has been the flavour of the season. Still, Mumbai will be pleased with their effort on Thursday in front of their home crowd. Skipper Rohit Sharma is a different player while chasing, and while batting at Wankhede, he takes his game to another level. This quality of his was again evident on Thursday. At the same time, he also shouldered the responsibility of batting till the end, and taking the team home. Mumbai would be equally pleased with the effort put up by Kieron Pollard, who brutalised the opponents with his big hitting, and made a meal of a challenging target in the end.

If there is one area of their of game which they would be disappointed with, it is definitely their fielding. A number of chances went down, and these were of big players, which could have hurt Mumbai. Opposition skipper Gautam Gambhir, Robin Uthappa and the dangerous Yusuf Pathan, all offered chances that weren't taken. In the end, Mumbai were lucky that their batsmen were too good. The bowling was a mixed bag for Mumbai, with the likes of Mitchell McClenaghan, Jasprit Bumrah, Tim Southee and Harbhajan Singh all finishing with middling figures. At the end, it was a good enough performance.

Kolkata, looking back, would feel that they lost because of two primary reasons -- one, they could not get past 200 in spite of a terrific start, and two, the inability of their bowlers to restrict the opposition. Gautam Gambhir and Robin Uthappa got the team off to a great start again, with the captain again crossing the half-century mark. But, Shakib Al Hasan again failed with the bat. And, his early loss meant, Kolkata also lost a bit of momentum. The likes of Suryakumar Yadav and Andre Russell played acceptable cameos, but they weren't good enough for Kolkata to cross 200. Even with the last-minute efforts of the big-hitting Yusuf Pathan, they could not get there. 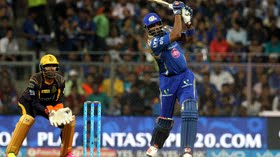 Kolkata could not defend the score in spite of decent efforts by their spinners because the pace bowling was very poor. Jaydev Unadkat playing in place of Morne Morkel, was all over the place, while R Sathish was also taken for plenty along with Russell, had a bad day. Sunil Narine, once again, stood out with the ball, but while Shakib was economical, he wasn't penetrative enough. Mumbai, on the other hand, timed their chase smartly, by seeing off the spinners, and attacking the pacers. It was a move that worked perfectly for them on a not-so-perfect day.