Delhi Test: India must not be satisfied with 2-0

Amidst all the pitch talk, and the ICC rating the Nagpur surface as 'poor', India will take on South Africa in the fourth and final Test of a long series, starting on Thursday. While there will not be much pressure on India,

Amidst all the pitch talk, and the ICC rating the Nagpur surface as 'poor', India will take on South Africa in the fourth and final Test of a long series, starting on Thursday. While there will not be much pressure on India, with the series already in the bag, they must ensure that the controversy around the Nagpur Test does not affect them, now that even the ICC has stepped in. The two Tests which have produced results so far have finished in two and a half days. And while Team India Director Ravi Shastri has maintained that he is happy with three-day finishes, the pitch at Kotla too will come into focus.

Yet again, Indian spinners will be looked up to deliver, just as they have been doing across the three Tests, of course while finding a lot of assistance from the pitches. Ravichandran Ashwin has been the tormentor for South Africa from the very beginning; even in the one completed innings at Bangalore, he did not spare the Proteas. Like Shastri, Ashwin too cannot find any logic behind all the talk surrounding excessively spinning pitches. In that sense, he will be expecting another spinning surface at Delhi. If that happens, South African batsmen could be in for further trouble, given the awesome form Ashwin has been in.

While Ashwin has undoubtedly been the star, he has found excellent support in comeback man Ravindra Jadeja, who has matched him when it comes to creating doubts in the minds of the batsmen, and at some points during the series, has even outshone him. The left-arm spinner has used the crease very well, and the angles he has created bowling from the corner of the crease has confused some very good batsmen. He has dismissed Faf du Plessis and South African captain Hashim Amla once each getting them to shoulder arms, unsure of where the ball is heading. At the same time, Jadeja has made important contributions with the bat as well. 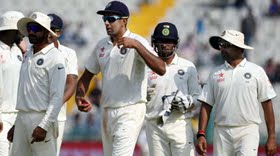 In comparison to Ashwin and Jadeja, leggie Amit Mishra has not picked up as many wickets, but his contribution has been no less significant. Mishra has stuck telling blows in the two Tests he has played in the series, and was surprisingly omitted for the rained out clash at Bangalore. If you look back at Mishra's performance in the series, he dismissed the dangerous de Villiers in both the innings at Mohali with excellent deliveries. Then, returning to the squad at Nagpur, he broke the stubborn partnership between du Plessis and Amla in the fourth innings, just as South Africa were beginning to threaten a fightback.

Even as India have put down South Africa's struggles in the series to lack of application from the visiting batsmen, they need to look at the failings of their own batsmen as well. While the possible unavailability of Dale Steyn is likely to make things easier for the batsmen, they still have Morne Morkel and Imran Tahir to contend with. Murali Vijay has looked the best of all batsmen, but he hasn't got big scores. Vijay apart, everyone from Shikhar Dhawan to Virat Kohli and Ajinkya Rahane have struggled. It hasn't been a pitch perfect performance by India then, at least not by their batsmen.