The curios case of Pragyan Ojha

We have heard of Test and ODI specialists, but we have never heard about specialists in Tests only in home conditions. India’s left-arm spinner Pragyan Ojha might as well be the first cricketer to fall in this category.

We have heard of Test and ODI specialists, but we have never heard about specialists in Tests only in home conditions. India’s left-arm spinner Pragyan Ojha might as well be the first cricketer to fall in this category. Having made his debut in 2009, Ojha has featured in 24 Tests over the last four years, but not a single of them has been outside the sub-continent. Apart from India, Ojha has only played Tests in Bangladesh and Sri Lanka. In spite of good recent performances, Ojha did not feature in the two Tests in South Africa and hasn’t been chosen for the New Zealand tour as well. 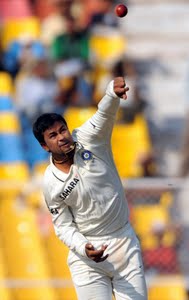 Ojha has every right to feel aggrieved. After all, in the last Test that he played for India, in November 2013, he picked up 10 wickets and was actually the man of the match. It was Sachin Tendulkar’s farewell Test, but it was Ojha who stole the show with his stellar performance against West Indies at the Wankhede Stadium. It has rarely happened in international cricket that a player is dropped for the next Test after being adjudged the man of the match in the previous game. But, Ojha has had to live with such fate.

Ojha was picked for the tour of South Africa, but did not feature in either of the Tests as Ravichandran Ashwin was preferred over him as the sole spinner in the side for the first Test, and Ravindra Jadeja was chosen following Ashwin’s flop show at Johannesburg. While the selection for the two Tests were on understandable lines, the axing of Ojha for the tour of New Zealand is definitely unfair. Although spinners aren’t expected to play much of a part in the Kiwi nation, Ojha had done nothing that can justify his axing.

Come to think of it, both Ashwin and Ojha have pretty similar records – Ojha has 113 wickets from 24 Tests to his credit at an average of 30 with seven five-wicket hauls while Ashwin has picked up 104 wickets in 19 matches at an average of 28.5 with nine five-wicket hauls. The one big advantage that Ashwin has over Ojha is that he is a proper batsman, with two Test centuries to his credit. This is why Ashwin has been preferred over Ojha whenever India have played one spinner. But, Ashwin’s performance in Australia and South Africa has been alarmingly poor.

There is no guarantee that Ojha would have done any better had he been given the chance instead of Ashwin. At the same time, we will never be able to find out the same unless he is given a chance. Remember even Anil Kumble struggled abroad for years, but towards the end of his career he had become an extremely potent force even in foreign conditions. It would thus be unfair to judge Ashwin too early. At the same time, while Ojha’s omission from the squad for New Zealand is understandable, it would only be fair that he gets an opportunity to prove his worth in diverse conditions away from home.