England pace bowler Stuart Broad has said there is no one-on-one battle between James Anderson and Virat Kohli as is being widely promoted. The 32-year-old is returning from injury as also added that he is fully fit.

"I really don't agree with the theory that one particular bowler can target a world-class batsman," Broad was quoted as saying in the International Cricket Council (ICC) website.

"You have to have that pressure and theatre at both ends against that sort of quality, that's when you get mistakes. If he's able to really watch Jimmy and play carefully but score off me, you're taking away any advantage as a team,” he added. 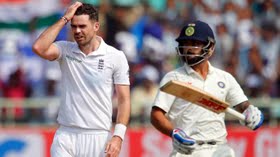 "As a bowling unit, we will just have to make it as hard for all of their batsmen to score early runs, but particularly a key player like Virat. We have to try and create pressure that way," Broad further explained.

Kohli was part of the Indian team in 2014 but struggled big time, managing just 134 runs in 10 innings. These included two ducks as well.