Two inconsistent sides Hyderabad and Punjab will take on each other in match number 48 of the Indian T20 Cricket League on Monday.

Two inconsistent sides Hyderabad and Punjab will take on each other in match number 48 of the Indian T20 Cricket League on Monday. Both teams are on 10 points from 11 games. It cannot get any closer and they would thus be desperate to win and stay in the hunt on Monday.

The match will be significant in the sense that this will be the last game for Hyderabad where they have the services of David Warner, after which he heads back to Australia for World Cup preparations. Warner has scored the bulk of the runs for Hyderabad this season with 611, some of them at an astonishing Warner-esque pace.

Warner's exit will be even more significant as his opening partner, Jonny Bairstow, who has amassed 445 runs, has already left for England. Warner-Bairstow pair has been the key behind Hyderabad success this season as the middle-order as well as the bowling, especially in the death overs, has struggled a lot. The injury to skipper Kane Williamson has only made matters worse for them. 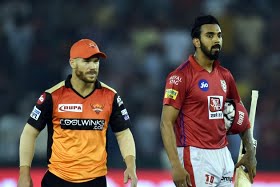 Punjab has been well served by their skipper Ravichandran Ashwin. His performance with the ball as well as in a couple of games with the bat has been impressive. But, he hasn't quite managed to inspire the team to enough victories. This is an aspect which he would be keen to improve upon.

If you look at their other bowlers, Mohammed Shami has been okay but the rest haven't been able to do much. Batting wise too they have been heavily dependent on their openers Chris Gayle and Lokesh Rahul, who have both amassed over 440 runs. However, apart from the odd good knock from Manish Pandey, their middle order hasn't really come good.

If you look at the numbers of Mayank Agarwal (262), David Miller (202) and Sarfaraz Khan (180), they tell a story in themselves. Nicholas Pooran's brisk knock in the last match would give them some hope.