India completed their domination of England cleaning up their visitors for 207 on the final day at Chepauk in Chennai and, in the process, claiming the series 4-0. Here are significant numbers from the final day’s play

India completed their domination of England cleaning up their visitors for 207 on the final day at Chepauk in Chennai and, in the process, claiming the series 4-0. Here are significant numbers from the final day’s play.

England’s second innings was a story of two halves. Their openers Alastair Cook and Keaton Jennings added 103 for the opening wicket. However, once the stand was broken, they folded up for 207. Effectively, after the impressive opening stand, England lost 10 wickets for merely 104 runs. 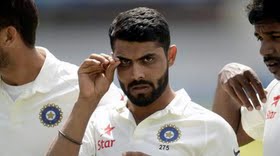 Jadeja achieved a unique feat during the Chennai Test. He is now the only player to hit a fifty, take ten wickets and hold four catches in a Test. Jadeja made 51 in the first innings, finished with match figures of 10 for 154, and took three catches in the second innings to add to his one in the first.

Jadeja achieved another all-round feat at Chennai. He became only the second Indian player after Kapil Dev to claim a ten-for and score a fifty in a Test. Kapil also managed the feat at Chennai, against Pakistan in 1978-79.

In stark contrast to Jadeja, Ravichandran Ashwin had a poor game. After the 12-for in the previous Test, he managed only one at his home ground -- 1/151 in the first innings and 0/56 in the second. This was his worst effort in the series.

Following the Chennai victory, India now have been unbeaten in 18 consecutive Tests. This is a new record for India. Their previous unbeaten record was 17 Tests from September 1985 to March 1987. The longest unbeaten record ever in Tests ever is held by West Indies. They were unbeaten in 27 matches from 1982 to 1984.

This is the second time India have won a Test series by a 4-0 margin. The previous instance was also at home. They thrashed Australia 4-0 in the 2012-13 Border Gavaskar Trophy.

Jadeja dismissed Alastair Cook six times in the series. This is the most any Indian bowler has dismissed a particular batsman in a series. There have 20 instances of an India bowler dismissing a batsman five times in a series. One was in this series -- Ashwin dismissed Ben Stokes five times.

India won 9 Tests in 2016, the most they have done in any year. Their previous best was eight wins in 2010. India ended the year unbeaten, having played 12 Tests.