India eased to a 6-wicket win with 42 balls to spare to win the third ODI at Nottingham. The tourists have now taken an unassailable series lead of 2-0...

India eased to a 6-wicket win with 42 balls to spare to win the third ODI at Nottingham. The tourists have now taken an unassailable series lead of 2-0 and thus cannot lose the series from here. The run chase for India was quite easy with Ajinkya Rahane and Virat Kohli laying the foundation with their 40s. AT Rayudu and Suresh Raina sealed the game with their big partnership with the former staying the distance to complete the formalities.

Rayudu was the top scorer of the innings and the match as well with 62 not out from 77 balls with 6 fours. This was a 3rd ODI fifty for Ambati Rayudu. Suresh Raina followed up his century at Cardiff with a confident knock of 42 from 42 balls. 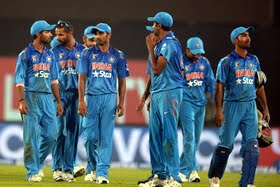 R Ashwin was the Man of the Match for his bowling efforts in the first half.

There weren’t any tremors in the Indian run chase. Shikhar Dhawan was first to depart in the 8th over when he uppishly cut Woakes to point having scored 16. Rahane batted beautifully to get 45 from 56 balls with 6 fours and a six before he was caught behind trying to run Steven Finn to thirdman. Virat Kohli found some form scoring 40 from 50 balls which included a six before his big shot off a slower one from Woakes was caught at mid on.

England innings: England have been bowled out for a modest total of 227 on a good batting surface at Trent Bridge. After a solid start of 82 in 18 overs, England simply lost their way once MS Dhoni had brought in the spinners. R Ashwin was the pick taking three for 39 in 10 overs while Ravindra Jadeja took 1 for 38 in his 10 overs. Suresh Raina bowled 8 overs to take 1 for 37 while AT Rayudu in his two overs chipped in with the wicket of Alastair Cook.

India’s first breakthrough came when a well set Alex Hales top edged his sweep shot off Raina to MS Dhoni after scoring a 55-ball 42. Cook after a slow 65-ball 44 stepped out early and was outsmarted by AT Rayudu who fired a full ball outside leg to have him stumped in the 21st over. Ravindra Jadeja produced the third English wicket when he beat the bat of Joe Root in the 23rd over with one that spun past his forward defence and the batsman was stumped after overstretching.

R Ashwin got the better of Eoin Morgan once again and this time had the left hander nicking his turning off break on the backfoot to the keeper. England slipped to 120 for 4 and kept on losing wickets at regular intervals. Ian Bell was run out by a direct hit from Mohit Sharma who was fielding at deep extra covers. Wicket Keeper Jos Buttler scored a respectable 42 from 58 balls to take England to a fighting total.

India would thank its stars as they lost Mohit Sharma to an ankle injury very early after a short 3-over spell but the spinners ensured that his absence wasn’t really felt.

Toss and Teams: India have won the toss and opted to bowl first in the 3rd ODI at Trent Bridge in Nottingham. The visitors have made one forced change with AT Rayudu taking the place of the injured Rohit Sharma who is out of the series with an injured finger. England too make one change with Steven Finn coming in for Chris Jordan.

The pitch is slightly damp and the conditions are overcast. It could be good for batting once it dries up and has just enough to encourage the seamers. There is nothing much for the spinners as per the experts.